Guild training:
Before joining the Undead Labs guild, Chaplan attended an academy in Louis’si’Anna.  While there, wrote for a starcraft strategy website after playing entirely too much Starcraft.  Was able to turn this experience into a job at a game company, where he did design and balance on an RTS title.

Negative:
Does not think in binary, which slows his scripting and spreadsheet abilities, reducing ability to interface with programmers
Sometimes lets “perfect” be the enemy of “finished”
Broken ankle from high school basketball – sometimes reduces DEXTERITY by -4
Watches way too much Twitch
Self-doubt
Existentialist 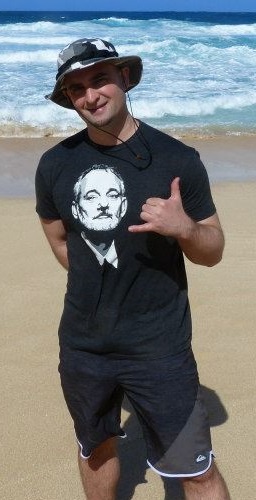 Hat of +2 stealth while in urban environments.
Bill Murray shirt of +4 to chilling out.

Conjure Tea
By going to the kitchen and combining hot water and tea, one is able to extract the power of caffeine.
Casting time: 3-5 minutes, depending how much water is left in the water heater.
Material components: Hot water, black tea, stevia.
Spell school: Alchemy.
Recast time: 2-3 hours.
Effect: +10 to cognitive abilities for 30 minutes.

Stare Into Space
You are able to zone out, and think really hard about something while staring at nothing in particular.
Casting time: Instant.
Cost: Soul energy.
Recast time: Doubles if sitting at desk near a window.
Effect: You become so engrossed in your thoughts that you enter “flow”.

Have “good” idea
Somehow, you have “good” idea.
Cost: 12 “good” ideas can be purchased for approximately 10 cents.
Base stat: Verbal communication.
Effect: Once cast, skill icon is replaced by Spell: Execute “good” idea.

Execute “good” idea
You are able to execute on a “good” idea.
Casting time: 1 week to 2 years.
Elements used: inspiration, blood, sweat, tears, soulmatter.
Recast time: Can only be cast after a successful cast of Spell: Have “good” idea.

“Chaplan” began playing videogames at an early age, mostly Intellivision and Atari.  Moved on to NES, followed by Genesis and Sega CD.  Much Street Fighter 2, tournament play during elementary and junior high. Met most of his childhood friends through basketball courts or arcades.

In high school, progressed to PC games, after being introduced to Doom II by a friend. Played Starcraft at international level while in college.  Moved on to competitive Guild Wars 1 after college, playing on multiple #1 ranked NA teams.  Followed this with a few years playing competitive Magic: The Gathering in Seattle area (Focus in “Legacy” format).  Played a lot of Baldur’s Gate 2 and Planescape Torment somewhere in there.

Lessons learned along the way:

Look anywhere for inspiration – movies, books, sciences, arts, music.
Play games, but be well-rounded in “R.L.” too.
Execute the basics.
Learn the rules before you try to break them.
Good ideas come from anywhere.
Critique your own ideas and subject them to the analysis of others.
Coming up with “ideas” is easy.  “Execution” is what’s really hard.
If you’re weak at something:
1) Find a mentor
2) Be quiet
3) Listen to what they say
4) Watch what they do
5) Put their lessons into practice
6) Repeat steps 2-5