In high school, I used to stay up until late night watching Starcraft: Broodwar pro-gamers duke it out in Korea, and contemplating what an awesome career they had. E-Sports was at its baby stage back then, yet I knew it was going to be big throughout the next century. What initially got my interest was the fact that players could take a video game, and play it to absolute perfection using game mechanics, creativity, and execution. It felt like an art.

I was just average skilled when I picked up Broodwar, but I watched pro players play the game, and analyzed WHY they were so good. Eventually, I became pretty good at Broodwar, and was able to add competitive video gaming to my list of hobbies. This was when I started to study game mechanics, and how competitive games were constantly undergoing balance tweaks and changes to improve and iterate on their current states.

And then I hit college. I struggled to find the right degree to pursue – What do I want to do for the rest of my life? I started out with Computer Science, and I ended up with Applied Mathematics, because I’m a slightly weird person that actually likes math. I loved math analysis, probability, and statistics, because I was constantly looking for solutions to everyday problems. With that degree, I had a decent number of options if working for the game industry didn’t work out. (I would’ve probably became an Accountant, Statistician, or Actuary.)

I joined a college group that competed in Broodwar, and had my fair share of fun. It turns out I was pretty good at competitive games. When Starcraft 2 came out, it was probably one of the most hyped games ever, yet it let me down. It was…too easy (relative to Broodwar). I was able to hit Grandmaster (peaking at #76 in North America, not too shabby) but the game became too bland for me. That’s when I started playing DotA, and shortly after that, League of Legends. As some of you might know, that’s when the magic happened.

Long story short, I ended up qualifying for their professional e-sports scene, called the League of Legends Championship Series (LCS for short), and I made a hard choice to put my last year of college on hold and explore the game industry for a bit. It really felt like everything was laid out for me, and I was truly thankful that I finally got the opportunity to actually consider and study the game industry. The whole journey and experience of being a professional gamer was definitely a ‘once in a lifetime’ experience but bragging rights and fame weren’t my focus. Rather, I took that time to make connections with game developers at Riot Games, to learn exactly what they do and how they think about designing and balancing their game. It was infinitely intriguing to me, and as a result this was the first time in my life where I was certain about wanting to be something – a Game Designer!

So I wrapped up my pro player career, and finished my degree as soon as possible. Shortly after I graduated, I got an opportunity to work at Undead Labs! I didn’t hesitate to pack all my stuff, and go on a 23 hour drive up to rainy Seattle from sunny San Diego. The past year here at Undead Labs has been a blast – I’ve been actively learning and growing from the veterans here every day, and can’t ask for a better working environment while making games I love. Really, the people I work with here feel somewhat close to family here! You should meet all of them when you get a chance.

One of the most important things I took from being a pro gamer was that even though I was good at something, it didn’t stop me from constantly looking for solutions to problems and using creativity to dictate how I worked. It’s quite similar being a Game Designer! I love my job so much that it’s still surreal sometimes when I get to work. Although my career in the game industry just started, I’m really optimistic about the games I will be working on in the future. I truly can’t wait until everyone gets to know about our next project! 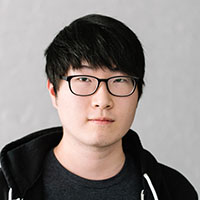