The zombie apocalypse is coming. You want to know how everything works. How dangerous is it? How can you protect yourself? We have the answers, but how much can we really say?

So today, we’ll share what we can. It’s not a catalogue of spoilers from the dev team. Instead, what follows are the thoughts and observations of a fellow survivor in McMillanville.

It starts with a single, stark fact of life: Everyone dies.

Reckon I can’t think of a more bullshit situation. And that’s a fact. When one of us dies, we come back as one of them. Our loss is their gain. Randy thinks the bites do it. He figures it’s something in the saliva or bodily fluids or some such thing. It’s hard to say. These days, ain’t like it’s easy to find someone who hasn’t been scratched or bitten at some point.

Shay’s got another theory. Says maybe we were all infected already. I don’t know if that scares me or not. Maybe that means we can find a cure. Maybe it means we’re all fucked. I just know this: so far, every one of my friends who’s died has come back.

The first time we had to put down someone we knew, I almost couldn’t do it. But then it went after Shay, and I just reacted. Later, my buddy Chuck asked the question we were all thinking: When these people die and get back up, are they still themselves? Deep inside, can they still think or feel? Do they have any choice? And did we?

But experience has answered that one, time and time again. We’ve seen how they act, more instinct than thought. And we’ve all seen that look. We’ve seen it in their eyes. Just hatred and hunger. Not one ounce of humanity left. Better that way anyway. It’s not your friend. It’s just a shell. It’s just a shell. 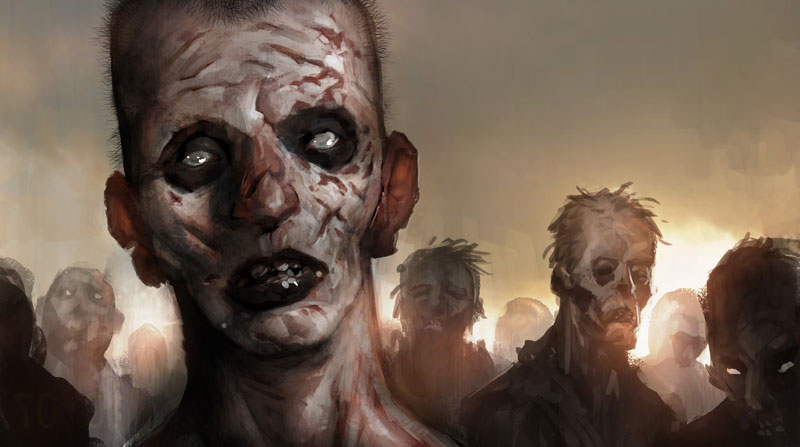 Put more of the bastards down today. It’s crazy to think about how much things have changed. I still remember the day we started calling them zombies. Sounded fake at first. Like something out of a fucking horror movie, but what else would you call them? You see a man die — stone cold dead — and then get up and walk. And there ain’t no way to put one down but remove its head or destroy its brains. Wasn’t too long before we got real comfortable with the term.

They say the first one’s always the worst, and I’m sure as hell not going to argue. I pumped ten bullets to the torso of that fucking waitress and she just kept coming. Took a bullet to the brain to finally drop her. Lucky for me, she was one of the slow ones. If she wasn’t, who knows? I’d probably be shambling around with the rest of them.

Everybody knows Randy’s the best shot, but he’s getting cocky. Today, he used that big ole Remlinger 700 to shoot a leg and an arm off of one. I swear he was aiming for the extremities just outta sport. The thing goes down, of course, but keeps on crawling. Never seen one deterred by pain, and that’s a fact. Well, Randy walks right up to it and caves in its skull. Stomp, stomp with his boot heel.

Reckless son of a bitch if you ask me, but he’s a sure shot, and I know we’re lucky he joined us. Just need to find a way to put his sharpshooting abilities to more reliable use. 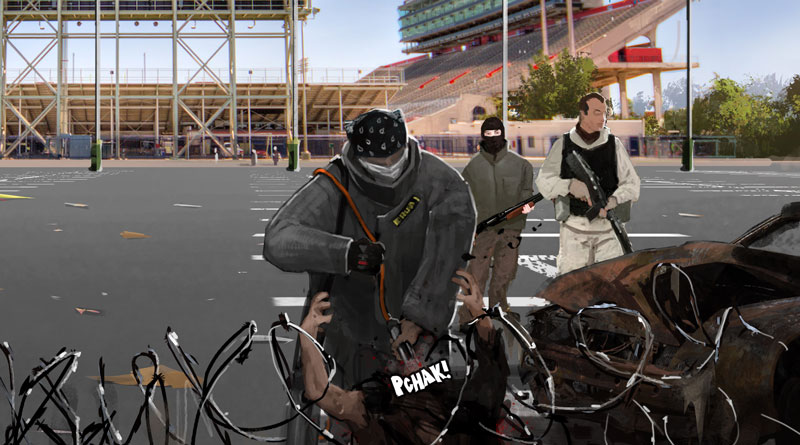 Can’t take nothing for granted. Tried to build a kind of guard tower for Randy out of oil drums and two-by-fours. Damn thing tumbled and nearly cracked open my skull.

Soon as Chuck and I have our talk about why duct tape is not a substitute for a 3¼ inch nail — even if it is “abundantly quieter than all that hammering” — we’re gonna hit the veterinary clinic. Shay’s right that we lucked out this time, and our old collection of first aid kits is running a bit on the thin side these days. We need to secure a more comprehensive inventory of medications and medical supplies in case we’re not so lucky next time. 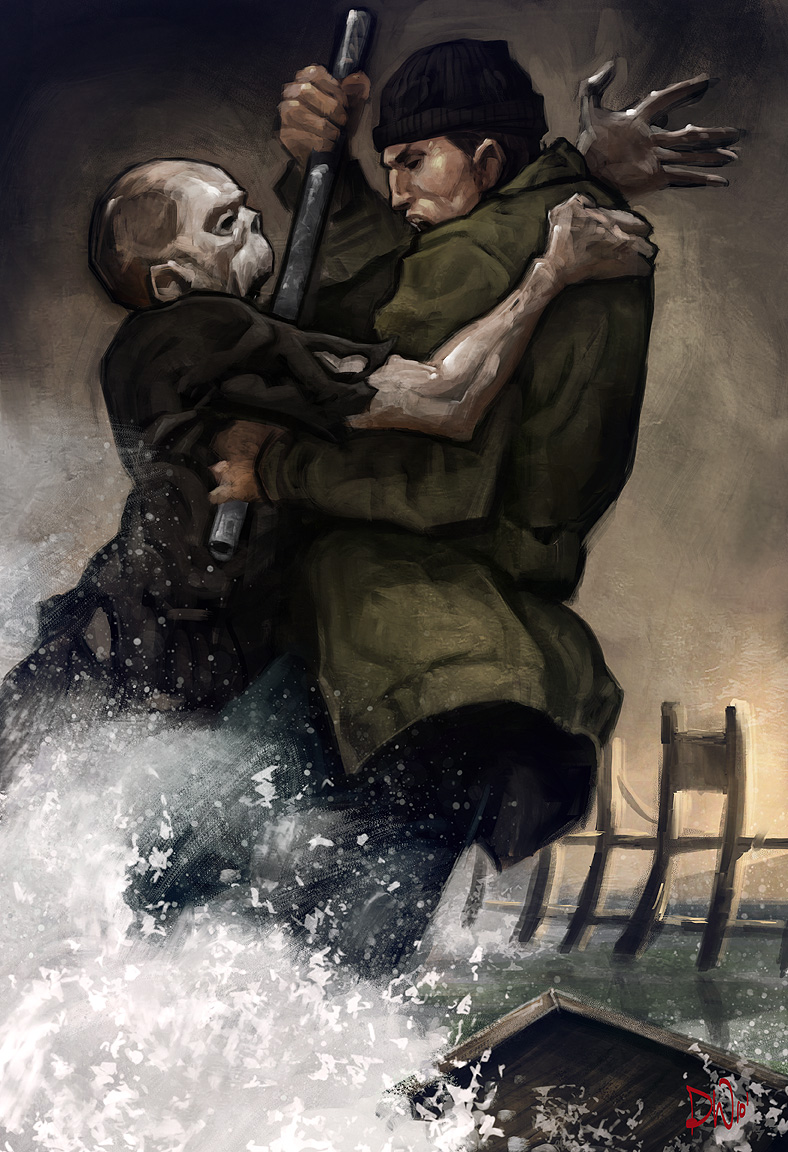 I don’t know if Chuck’s gonna make it. He’s starting to have that look. I do know I don’t want to be the one to do it…if it comes down to the mercy shot.

We try to look out for each other. Usually, when someone goes down, we’re able to drag ’em to safety. Had some pretty impressive escapes a time or two, even when someone started off on their own, we got there in time. You might lose some of the stuff you were carrying and be outta commission for a bit, but it’s better than the alternative.

Hell, I’m pretty careful, but everyone screws up on occasion. A time or two, I’ve turned a corner while bringing home a duffel of soup cans or some such thing and found myself face-to-face with a whole horde of zombies. Next thing I knew, I was waking up in the infirmary or over with the Wilson boys…back when they were still among the living and breathing.

Can’t push your luck though. How many times can you count on getting rescued in a situation like that? Not many, I reckon.

Because of some of the scrapes we’ve survived, people sometimes look at me and Chuck like we’re invincible, but we know better. Fact of the matter is there’s nothing magical or special about either of us. Every day we stare down death, and every day we face the risk of extermination. There’s no Ctrl-Z or reload to save us.  And once you’re dead, you’re one of them. There’s nothing you can do to control it or fight it. It’s a done deal. The best you can hope for is that your friends carry on in your memory.

Well, don’t count on it, Chuck. I’ll be damned if I’m ready to make any memorials for you. You got no choice. You have to pull through. You have to. 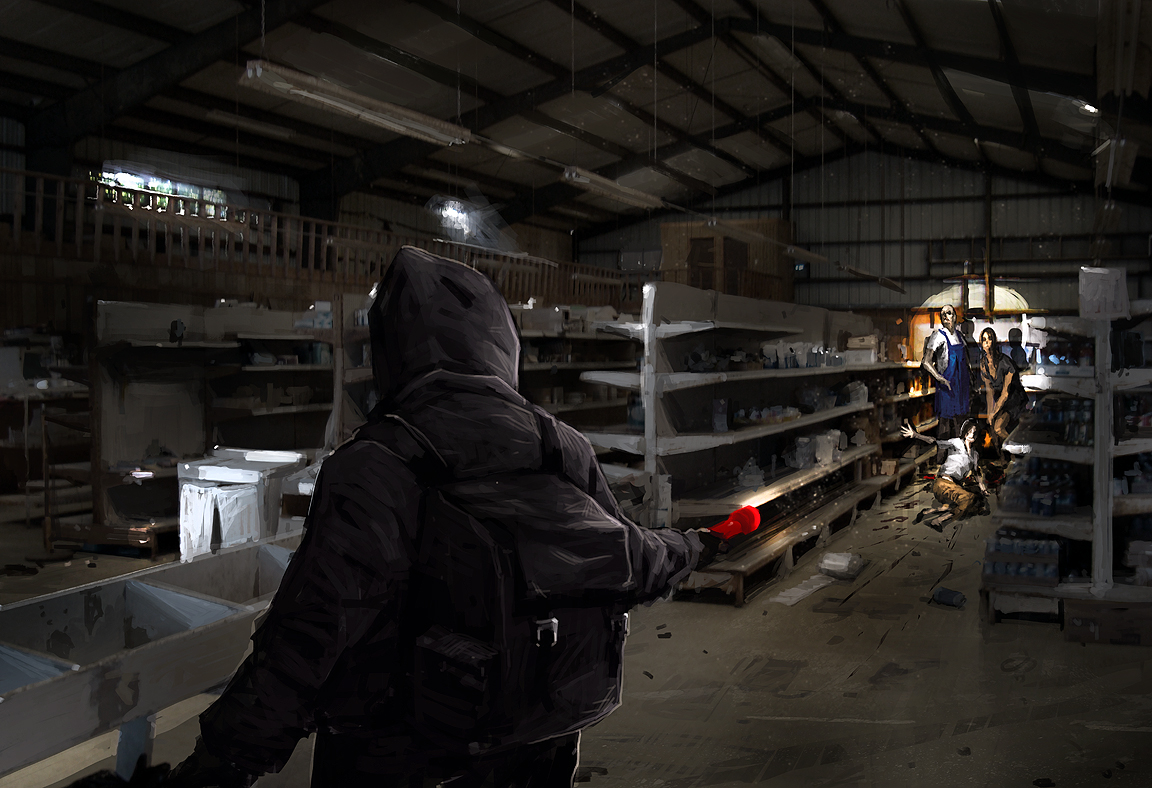 Fever and chills for Chuck today. He has the glazed over look in his eyes that we’ve all seen before. Shay asked me what happened out there. Always treating everything like it’s a puzzle that can be solved, that girl.

I told her we took our precautions. We’ve been carrying food and medicine with us on our scavenging runs, like she insisted. Give yourself a burst of energy or heal up a wound and help you keep going. It can help you out of jam, but you have to think about weight. Sure, we could have taken more with us, but the weight is a killer. She knows that. The more you carry, the faster you wear out.

She wanted details, but what was there to say? We got tired, but those bastards never slow down, and they never get tired. Ain’t too hard to ward off a single swipe or attempted bite from a zombie, but when you’re exhausted, when you get surrounded, you can’t…you can’t keep your feet. They tug at you, drag you down.

What could I tell her?  Chuck got all tore up. I helped him to his feet, but there were so many… he was taken down again. We were lucky to get him back home in one piece.

I couldn’t really finish the story. We looked in on Chuck together. Saw the same thing. He might not make it. I didn’t say anything, but she leaned in and real quiet like said, “I’ll do it. If it needs to be done.” Don’t know where she gets the strength. 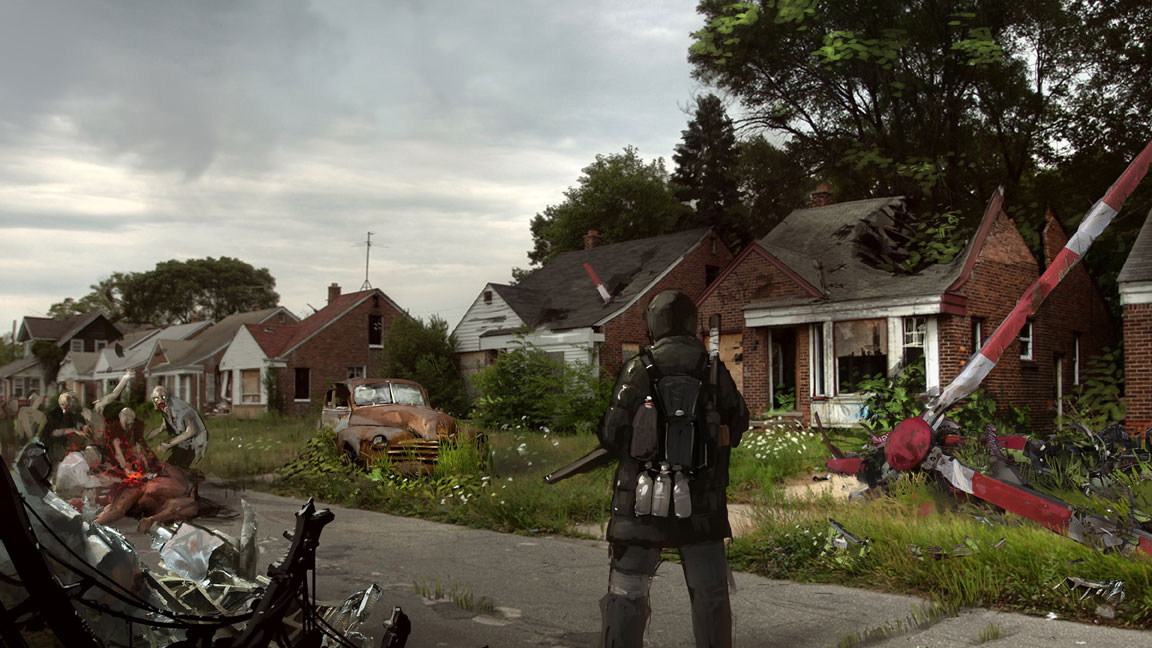 Hell of a day yesterday. Randy says that karma is on our side. Wouldn’t have taken him for a buddhist or hindu or whatever that is.

A car wrecks half a block from our little stronghold — I can call it that now that the guard tower is stable — and the commotion brings a mess of zombies. The driver’s still alive, but Shay doesn’t think that trying to get to him is worth the risk. “He’ll be one of them by the time we get there,” she says.

Randy ignores her and looks to me to make the call. “I’ll go,” he offers, plain as that.

“Just cover me, asshole,” I answer and head out to get him. To her credit, Shay comes with.

The repeated report of Randy’s Remlinger behind us has the simultaneous effect of thinning the zombie numbers ahead of us and drawing some away from the car. The fuckers do have a spiteful attraction to loud noises.

The driver’s still alive when we get there, and we learn, once he’s safely back home with us, that he’s a doctor, an actual licensed MD. He’d been holed up at the church with a few others but when things turned to shit, he grabbed a car and tried to get the hell outta dodge.

Hope to God he’s a better doctor than he is a driver. 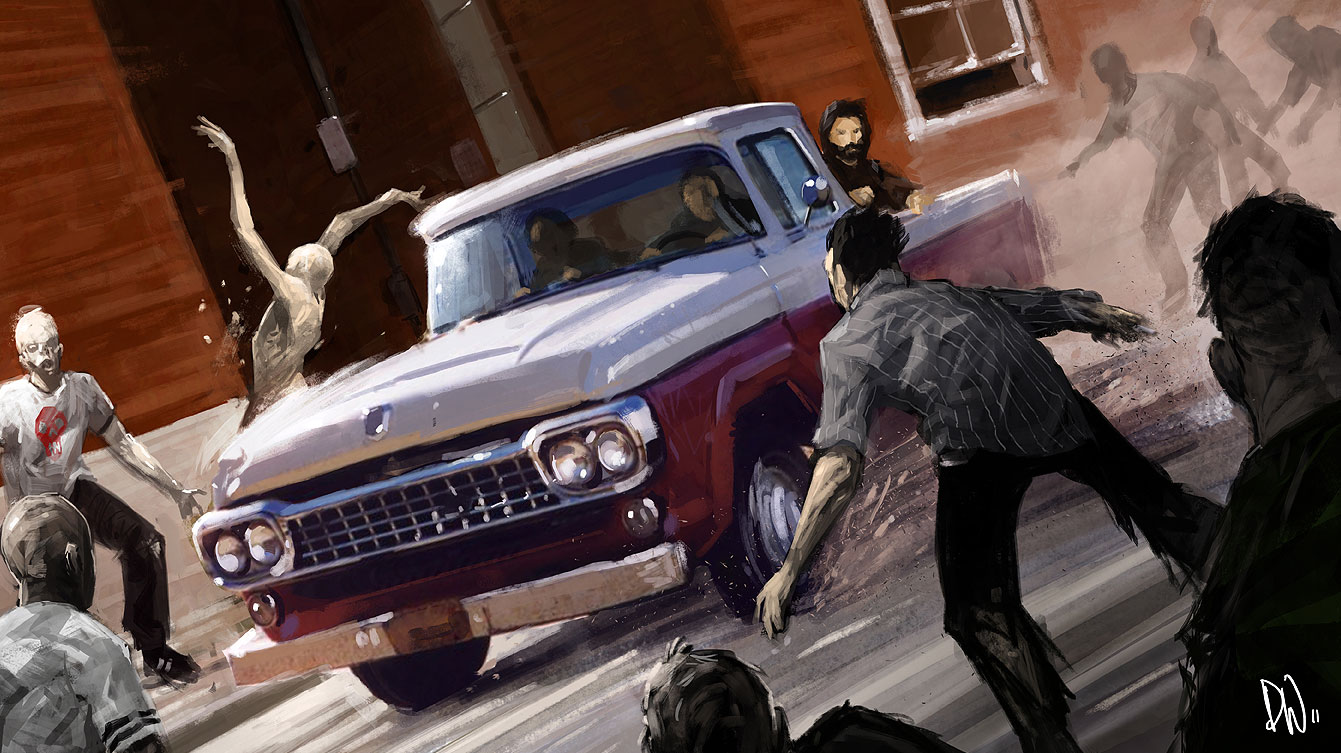 The good doctor shows his gratitude by tending to Chuck. Popping a Tylenol is about as much as I know about medicine, so I can’t say exactly what the doc did. All I know is that whatever it was helped Chuck turn the corner. This morning, he was even up and moving around a little.

Doc says Chuck’ll be kind of low energy for the next day or so, but the talk of a mercy shot is behind us. The doctor’s still got a busted up leg from the wreck, so he won’t be able to join us on supply runs for a while. That’s okay by me. I think we might prefer to keep him safe and sound at home anyway. He can still treat people with a bad wheel, and that’s what matters.

Maybe Randy’s right. Karma’s on our side. Think I might head to the church tomorrow, see if anyone else made it and needs our help. We’ve been treading water too damn long. It’s time to start trying to build something. 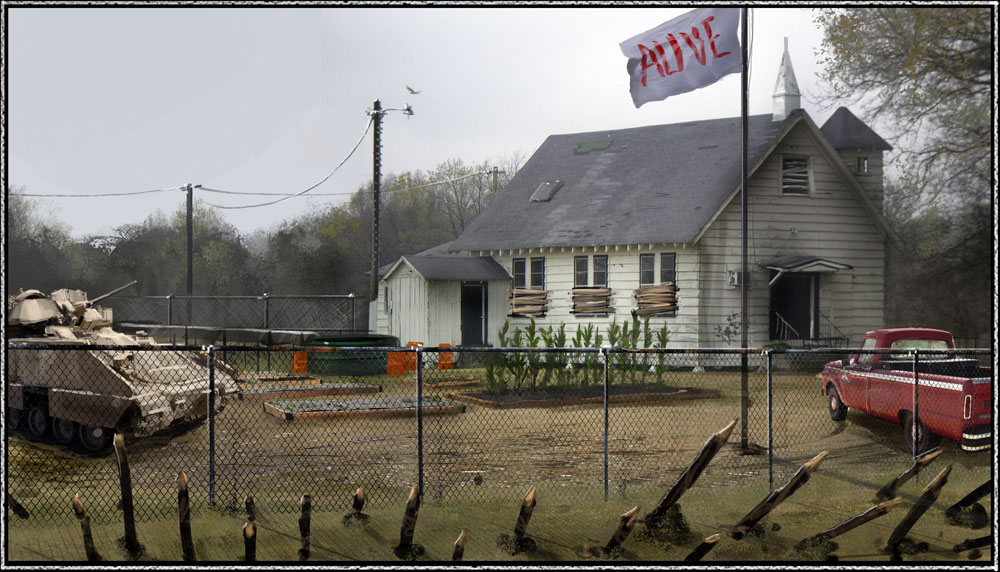 This is the heart of Class3. It’s a game that’s not just about fighting zombies — it’s focused on the dangers and struggles of post-apocalyptic survival. To us, this means making your choices matter. It means giving you freedom with consequences, and sometimes those consequences are harsh: your community can be wiped out, and all characters (including yours) are at risk of permanent death.

This is a risky design choice and one that could easily lead to a game that’s only for the most hardcore players, but that’s not our goal. We are always guided by two words: fun first. That’s why getting overwhelmed in a single fight won’t instantly get you zombified. It’s also why you’ll get clear warning signs if a character is close to succumbing, and why there are ways to build on your legacy if someone doesn’t make it.

As development moves forward, we’ll continue to test, tweak, and balance a lot of these mechanics, but our guiding principles have never changed.

For a lot of you, I know this article will only whet your appetite for more information. (That’s good, right?) While I’m sticking to my guns about not giving everything away before the game is even out, I’m sure there are a lot of questions we can answer right now. If you’ve got one, hit reply, and fire away.

We’ll do a follow-up Q&A article next week.