In January we posted a spy-cam video of the Lab that included some footage of the in-development version of Class3. You responded with a massive amount of comments and questions, so today we’re going to tackle some of them in a new Q&A.

Read on for fresh new details about Class3!

Question from ‘Sorryaboutmyverbaldiarreah’: Will there be load screens when entering different regions (ex: a house) and will we be able to enter all buildings?

Class3 is a true open-world game, so conveying a sense of freedom and the joy of exploration is a core pillar of the game. We don’t want you debating whether the load time is a price worth paying for entering a building, so we’ve invested in the technology to allow the world to be seamless with no loading screens.

Whether all buildings could be entered was a significant debate early in the project. It takes a substantial amount of time to model the interiors of every building, of course, but more importantly, we don’t want to create a game that forces you to enter hundreds of mostly empty buildings to find the cool stuff. Ultimately we were able to solve both of these issues, so yes, you will be able to enter every building in the game, unless there is some visible reason why you shouldn’t be able to (e.g. it is collapsed, or burned out).

‘Seth, building a base’ queues us up to talk about something fun: I like how it looks except the zombies are a little too fast and that one fat-guy zombie broke right through the barricades which kind of disappointed me because I was hoping to camp out in a building for a couple of days, but then I thought, ”Maybe his construction skill is too low, or maybe he didn’t have very good supplies to build a barricade strong enough”.

The snippet of siege play you saw in the spy-cam video showed a dilapidated farmhouse under a massive, sustained siege from multiple hordes, including a particularly large zombie who was quite effective at smashing down the barricades. In general, barricades will last longer than you’d assume from the footage. While barricades are at best a temporary measure, they can be an effective means of slowing down a horde attack if you inadvertently give away your presence.

A comment from the mysterious ‘M.’ states: Lots of cool things in the “Spy Cam” footage. The music theme was also really good… ominous, while not being overwhelming.

That music is a piece composed for the game by our audio director Kevin Patzelt. You can check out more of Kevin’s music on his band’s Facebook page.

We’ve received a ton of comments about the music, so as a special treat for our fans we’ve decided to release the track you heard playing in the video footage. Listen, download, and enjoy!

Kevin does great work, but he can’t personally do it all, so we recently selected the composer for Class3. We’ll be announcing who it is in the next few weeks, and I’m pretty sure you’re going to be excited when we do. No joke.

‘qwerty’ asks: Is Class3 still going to be split screen? I’m just wondering because most open-world-like games I know of don’t support it.

‘Pepe’ states: By the way, Zed Team, I would love to see some great (and freaking hard) achievements for this game. Like blowing up 50 zedheads with a grenade, or make 5 headshots with a single sniper rifle bullet…

Those are great ideas, Pepe. I’d also love to see achievements like launching a zombie over 30 yards by hitting it with a vehicle, or tossing it over 30 feet in the air with a land mine, or using a chain of land mines to blow up a zombie, or, killing X zombies with an exploding vehicle.

Just, you know, for example. 😉

‘Joseph’ expresses his wishes: Hopefully there will be some sort of climbing in this, like jumping over gates, jumping to grab a ledge so on and so forth.

Climbing, jumping, grabbing, throwing, hanging, ducking, diving, and peeking — these are the sorts of things that make the world feel like a real place, rather than a stage set. This kind of organic interaction with the world has been one of our highest priorities from the start of development, and I can absolutely confirm that that you can do all these things.

‘Josh’ asks if we know what he means: This is just a hope, but I really hope cars are not totally disposable at every turn. Making it a real decision to leave the compound with a truck, for practical purposes of bring back larger pieces of salvage, or choosing to go on foot, for fear of losing your only vehicle. You know what I mean?

Vehicles are precious assets in Class3. Not only can they get you to remote areas quickly for rescue missions or resource runs, they also afford substantial protection as you drive through zed-infested areas. On the other hand, if you trash your truck, you’re not guaranteed to find a serviceable replacement around the next corner. In fact, you might be in real trouble; stranded out in the middle of nowhere, or in the midst of the town’s heavily infested industrial district, short on supplies and nowhere near a safe house.

Class3 tracks and remembers all the vehicles in the game, including where they are, who currently ‘owns’ them, and their damage state. If you destroy a vehicle—accidentally, by crashing it or trying to plow through one too many hordes, or intentionally, by making good use of its explosive potential—it will stay destroyed. If you park it out in the boonies somewhere, it’ll stay there. If you “borrow” it from another survivor group without permission, they probably won’t be too happy with you.

If you’re careless, you may eventually find yourself without a ride. However, sometimes you’ll discover new vehicles in places you’ve already explored, perhaps abandoned by other survivors who have now moved on. We want cars to be precious and meaningful, but we also won’t make your life a permanent hell if you have a little fun.

‘jakeawesome’ asks: Just out of curiosity, what physics engine are you using for the game, everything just looks so fluid, is it Euphoria?

We are using CryENGINE 3 for Class3. The physics you see in the spy-cam footage are driven by the in-engine physics package. One of the big benefits to using CryENGINE is that the physics implementation is tightly coupled to the engine and associated tools, which allows us to integrate physics-based interactions directly into the core game mechanics.

Rest assured, Class3 is, and always has been, an open-world zombie apocalypse simulation.

‘regie jonosan’ laments: I’ve been following this game for aaaages, seems like the designers are straying from the original premise of an open world rpg zombie apocalypse ‘simulation’ into more of a normal game…

One of the reasons developers are hesitant to release early peeks at raw gameplay is because it’s impossible to convey the breadth of the play mechanics in small snippets. While our spy-cam footage showed some of our core combat and world-interaction mechanics, it did not show some of the more unique elements of Class3 like base building, survivor-community management, manning watch towers, interacting with other survivor communities, researching new technologies, vehicle mechanics, or complex zombie infestation and horde behaviors. Rest assured, Class3 is, and always has been, an open-world zombie apocalypse simulation.

‘ManicDxM’ asks: Will people be like ragdolls if they are hit or fall off a building? That would be cool if they are.

People will ragdoll, yes. And more importantly, so will zombies. We’re making good use of ragdoll physics to let you use your environment as a weapon. Glass windows, trash dumpsters, picket fences, the hood of your trusty pickup—all surfaces with great possibilities for taking out zeds with efficiency and panache.

You could say that the entire game is a perma-death, see-how-long-you-can-live-for experience, but on a large scale.

‘Griff’ asks the Big One: This is a zombie survival game at its core, so is there going to be some sort of perma-death, see-how-long-you-can-live-for survival mode? I just think an “ending” to this game isn’t required, but I know you guys want an epic story.

[JP] You could say that the entire game is a perma-death, see-how-long-you-can-live-for experience, but on a large scale. It includes not just the quick, pulse-pounding drama of extended sieges, but also the intense, life-or-death struggle to carve out and defend small pockets of safety in a world overrun by the undead. Will there be throwaway, repeatable survival modes? No. There are other games that do that quite well, and other games that do the zombie-corridor-shooter thing well. I love those kinds of games too, but we’re creating a simulated world.

‘Hartman’ expresses concern about fat zombies: I know obesity is becoming a common sight but those big zombies were a tad too big. it reminds me of Left 4 Dead and any other zombie game I can think of to be honest. Every time I see them its like why did they even put them into the game?

For anyone worried about the imminent arrival of Tentacle Zombie™ and Winged Zombie™: don’t be. This is a game about surviving the zombie apocalypse; not a horror game about mutants or demons or fungus creatures. Our goal is to ensure that Class3 zombies retain their humanity, because that’s a big part of what makes the genre powerful. They are us.

That said, we also want to inject some strategic variability into the game. Some zombies are faster, some slower, some stronger, some louder, some have keener senses, and the like. We will exaggerate the range of human variability (because, hey, that’s part of what makes games fun), but Class3 zeds will always be recognizably human. So sorry, no Tornado Spawning Zombies this time around.

‘Spencer’ wants to kick back with a cool beverage and have some fun with the apocalypse: Remember in Dawn of The Dead when there was a great horde outside the mall? and when the guy with the sniper rifle was holed up on the roof of his shop and taking headshots at zombies? I hope we get to do that.

Here’s our art director Doug modeling the shirt he happened to be wearing today. If you recognize that, you’ll understand our intentions here. 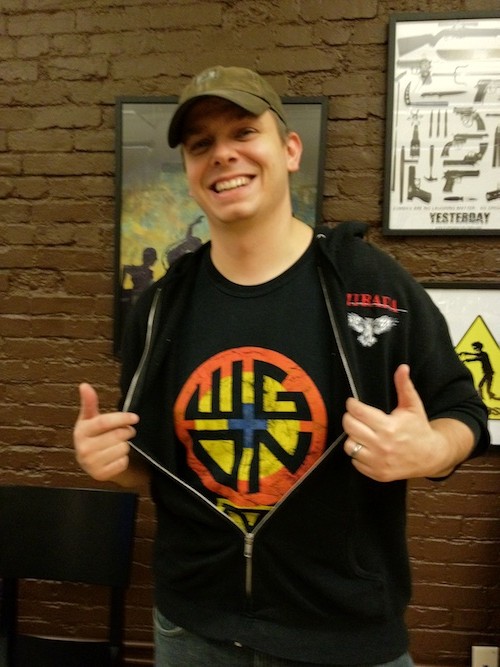 Everyone asks: When the hell does the apocalypse begin?

We’re getting there, folks. We’ll tell you as soon as we can. I can tell you that we’re right on schedule, and that you’ll be learning much (much) more about Class3 this spring.