It’s been awhile since we introduced a Team Zed member, so today I’d like you to meet our audio director, musician in residence, and unapologetic gear geek Kevin Patzelt. Before joining Team Zed, Kevin worked as a sound designer, sound engineer, and voice director on numerous excellent game franchises including Supreme Commander, Disgaea, Skate, Trauma Center, Lord of the Rings, and Call of Duty. Most recently, he worked on an unannounced open-world game project at Surreal Software (now WB Games) alongside our own Brant Fitzgerald.

He must have made quite an impression, because one of the very first things Brant said to me on his first day at the Lab was “When we’re ready for an audio director, I know our guy.” 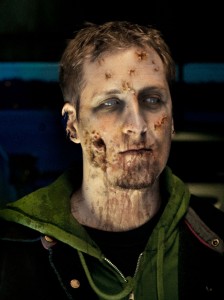 Sound and music should be an integral part of the gameplay experience, rather than something tacked on at the end of the production cycle. Games like Red Dead Redemption and Castle Crashers on XBLA are great examples of how powerful it can be when the sound and music work together with the art and design to create a great game experience. We knew that this was what we wanted for our game, so we realized that we needed to find an audio director who was a hardcore gamer, a zombie freak, and an audio geek — and we knew that we wanted him on board immediately.

We brought Kevin in to do some prototype work for us and quickly realized that — as Brant promised — he was indeed our guy. We asked him to take on the role of audio director shortly thereafter, and now he’s immersing himself in the nuances of how metal baseball bats sound when connecting with human skulls and pondering slabs of raw meat as the ultimate sound source.

He’ll kill me for outing him on this, but that background music you hear in our Friday At The Lab video is some of his early prototype work for ambient music in Class3. He was out of the office last Friday, so I snuck it in as a soundtrack without him knowing. Kevin’s an extreme perfectionist and would have insisted on being able to polish the mix before we ever let anyone else hear it, but since it’s just too cool not to share, I’m just going to have to ask for his forgiveness on this one.

I think I used the phrase “gear geek” earlier. Want proof? Check out these photos of his sound studio. The bulk of the audio you hear in Class3 will emerge from these stacks of inscrutable knobs and wires.

PS: Be sure to check out Kevin’s welcome to his fellow survivors for the raw Kevin feed.