What does “Balance” really mean?

Balance is a misleading term. You might think this means “everything is as good as everything else”. This isn’t entirely incorrect, but it misses out on one of the great things we can create through games: A series of interesting decisions.

END_OF_DOCUMENT_TOKEN_TO_BE_REPLACED 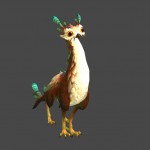 Combat lies at the heart of Moonrise, and it takes a lot of forms. You and your team of trusted Solari might battle wild, rampaging Lunari. You might fight against another Warden in a friendly duel. Or perhaps you’ll face a truly nefarious villain, with innocent lives at stake! But regardless of the enemy, combat follows the same rules.

How do you fight?

END_OF_DOCUMENT_TOKEN_TO_BE_REPLACED

[Meet Brian. He has gaming in his pores, starting with building with the Warcraft III editor as a kid, to setting his sights on video game design in college, to shipping Marvel Super Hero Squad Online while still in college, and from there becoming a designer at Glu Mobile working on several games, the best known of which was the incredibly successful Deer Hunter 2014. The back of his car contains every RPG handbook known to man, as far as I can tell. Certainly there is no room for actual people to sit. We love his enthusiasm, and how much he cares about our future Moonrise players. — Sanya]

One of our favorite aspects of Moonrise is the way in which your character (your Warden), participates in combat. You’re right there with your team, hurling fireballs, doling out heals, and actively engaging with powerful foes.

END_OF_DOCUMENT_TOKEN_TO_BE_REPLACED

by Andy Collins and Ian Adams

Meet two more of our designers, Andy Collins and Ian Adams. Andy, the lead writer on Moonrise, is an old-school storyteller. He was the lead story designer on the Marvel Heroes ARPG, and he also spent 14 years at Wizards of the Coast as a designer on D&D and other RPGs. Most importantly in my book, he’s been a DM — that’s dungeon master, if you never played D&D — for more than 30 years, which means he knows how to spin a yarn that keeps people playing. Ian is a content designer and a writer on Moonrise, and an inspiration to any gamer who ever dreamed of going pro. He started in customer service, worked his way up until he was running a QA team, and transitioned into design, where he eventually became the lead designer on Battle Nations. He knows what works, and what only works on paper. These are great guys, and great designers, and we hope to continue this conversation on the forum in the future! –Sanya

The people in Moonrise — the average citizens of a town like Gateway or Kijang Village — probably wouldn’t call their lives dangerous. And they’re not, not really. Sure, there are places you avoid, precautions to take. But it’s odd how quickly people start treating the most precarious, marginal survival as acceptable. Even normal.

END_OF_DOCUMENT_TOKEN_TO_BE_REPLACED

As we get ever closer to release, we’re immensely enjoying the way the music and sound pulls everything together. Sound Guy Kevin, and Jesper Kyd, have been kicking a lot of ass. Today, we’d like to share three terrific tracks composed by Jesper. But why just share them? Let’s have a contest!