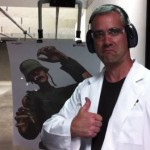 Last week, we took a company field trip to a local gun range to get some hands-on experience with pistols. Only a few of us had actually shot a handgun before, and since we’re building a zombie survival game, we figured that it would be a good plan to make sure that everyone on the team has at least fired one before. I mean, how can you build something without knowing how it actually works?

The day was pretty amazing. As soon as we arrived at the range, we were given a short safety class. In a half hour or so, we had learned how to properly handle our weapon — how to carry it, how to check to see if it’s loaded, and how to hold it. Our instructor even drew little lines on our hands to help us remember the proper pistol grip. Before we headed into the firing lanes, we picked out a pair of ear protectors, a set of safety glasses, and our first spread of 9mm pistols.

Once we were on the range, the real lessons began.

END_OF_DOCUMENT_TOKEN_TO_BE_REPLACED 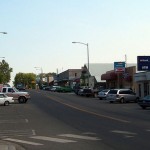 I grew up in the small Central Texas town of Temple. Never heard of it? Most people haven’t. It’s about an hour north of Austin, and about half an hour south of Waco. You remember Waco, right? Yep, that’s my childhood stomping ground. That’s where I learned to play D&D, fell in love with video games, saw Dawn of the Dead for the first time, and pushed wheeled trashcans full of day-old Mexican food down the alley behind the restaurant with my car at 40 mph because there was nothing else to do.

Temple isn’t exactly the glitzy metropolis you’d expect to see in a game. If I’m donning my cape, mask, and lightning fists to take on some evil supervillains, I want to be somewhere sexy like Paragon City or Tokyo. If I’m taking up my two-handed mace to get my Paladin on, I expect the best chance to be admired is somewhere densely populated like Stormwind or Paris. When I suit up in my NFL-designed space marine combat armor, I look forward to dishing it out to the bugs on their homeworld of X’zzzt.

But the zed apocalypse? Forget the cities and the flashy locales — many of us will be holding back the rotting hordes in small towns just like Temple.

END_OF_DOCUMENT_TOKEN_TO_BE_REPLACED

If the zombie apocalypse hit each of our hometowns tomorrow, what would the world look like? While some of us live in huge cities like New York City and Los Angeles, many more of us come from smaller towns — ones that are strikingly similar to those in Class3.

As an experiment, we’re creating an “Undead Labs Outbreak Map” to visualize where all of us would be holed up during an outbreak. Help our research by adding your city, state, and country to our short form here. Next week we’ll share the results, so stay tuned!

END_OF_DOCUMENT_TOKEN_TO_BE_REPLACED 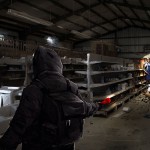