“Did you write the code that spits out an empty page at the end of every print job?”

It was June 1996, and I was on a pay phone in the cafeteria at Hewlett-Packard interviewing for a job at Blizzard Entertainment. The guy on the other end of the line was Patrick Wyatt, their VP of R&D.

END_OF_DOCUMENT_TOKEN_TO_BE_REPLACED

I wanted to let you know we’ve signed a multi-year, multi-title agreement to extend our development relationship with Microsoft Studios. We’ll be able to share details later this year, but as with State of Decay, we think it’s best if we just keep our heads down and build some prototypes before we talk too much. For now, suffice it to say there are big things going on with State of Decay.

END_OF_DOCUMENT_TOKEN_TO_BE_REPLACED

Today I’m happy to announce that our first DLC for State of Decay, ‘Breakdown’, has been delivered to Microsoft for pre-certification testing. This means the game is content-and-feature complete, and all that remains is to squash any remaining bugs and make final tweaks to tuning and balance.

So what happens from here?

END_OF_DOCUMENT_TOKEN_TO_BE_REPLACED

We’re offering logo t-shirts and hoodies — the very same designs worn by the developers — for sale at our cost to State of Decay fans around the world. We’ll take orders during the week, then send them off to the printer every Monday and ship them directly to you as soon as they come off the press.

We also have official State of Decay posters left from our PAX East run earlier this spring. Some of them are signed by the development team. We can’t sign them all, and it’s not cool to charge for something like that, so we’ve mixed the signed ones in with rest of the them. You might be one of the lucky ones!

All items are made in the USA.

If you get some gear, tweet pics of you showing your SoD pride to @undeadlabs! 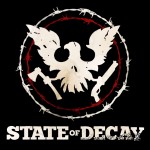 The State of Decay soundtrack has arrived!

Here’s the State of Decay Main Theme to get you in the mood.

The soundtrack is available today in the iTunes Store, and will be available on Google, Amazon, and Xbox music stores soon after. We hope you’ll enjoy Jesper’s music as much as we do!