You recruit four of your buddies into a 5 person team. Much like football, we’ve got a regular Season, Playoff Season and then a Big Game. In the regular Season, you and your mates will play against another team within your league.  Each win or loss counts towards your stats for the Playoffs.  After the 10 week period, we’ll take a break for the Holidays and when we return, the top teams in each League will play against each other until there is only one Human and one Zombie team left. Those two will go to the Bowl.

What you have to do:

Each team needs 5 individual Players on it.  They need to choose their League (Humans Vs Zombies) and slot their players into their position.  The Team Captain is responsible for filling out the form completely.  Form link – http://bit.ly/2aMGPoE

This year we’re allowing Free Agents into the Draft. If you don’t have a team, but want to play, just fill the form out through the affiliation selection. You don’t need to choose an affiliation (human or zombie) but if you don’t, Nicole will throw you into any available space.

We’re asking for email addresses from you so that in the event that your team wins, we can contact you.  We will never share your email, or use it for anything but giving you a prize.

Make sure that when you choose your Team Name and Team Picture it’s something we wouldn’t be horrified to show our Grandma. (She’s a gamer Grandma)

Teams that do not fill out the form correctly will be disqualified from the Season. We’re allowing you to edit your submissions until the Season starts, so check and make sure that you submitted the correct information.

Duplicate Teams will also be removed. Talk to each other, elect a Team Captain and let them do the work (those poor suckers).

The form is different this year. You won’t be choosing special slots for your team. Also, if you are teamless but still want to play, you can register as a Free Agent, and Nicole will assign you a team.

Your Name – Self Explanatory

Your Email Address – Also self explanatory. We aren’t asking for your teammates addresses this year. But as the team captain you are responsible for collecting enough information in the event that you win, your mates are taken care of. If you do go to the Bowl, we’ll be asking for Shirt size, mailing addresses, first and last names and email addresses to ensure that the prizes are sent to the right place.

Are you registering yourself or a Team? – This one is different. You can go solo or sign up as a team. Check the box for your situation.

If you are registering your team, continue on to the next steps.

If you are registering as self but feel really strongly about whether you end up on a human or zombie team, you can check your preferred team affiliation. If you don’t care, leave it blank. You’re done at that step.

Team Captains – See the warnings above.
The Game:

Each week the teams battle it out in a roll scenario much like Last Human Standing. All you have to do is sign up. We do the heavy lifting.  The difference this year is that we’re going to roll the games live every week during BSD.

The winner of each match gets a Win in their Column for that game.  We play a set number of weeks.  At that end of the regular season, we go into playoffs.  The top teams of each “League” play for the Bowl Spot. (That number will be determined by how many teams we have in each League) The winners of each game go onto the next Game in their “League” until there is 1 team left standing in each one.  Those two teams will receive lesser prizes.

Zombie Nuts’ 5 players roll against Zedheads’ 5 players. Best rolls out of 5 determines the outcome of the game.

OUTCOME: Zedheads win, but both teams have one less player next round.

If there is a game tie, the two Teams will have a rematch. (ie. We’ll roll it again and whoever wins that match wins the game)

It’s not a real Undead Labs game unless Nicole can spread some carnage. So, we’ve included modifiers into the rolls.

If the player rolls a 12, They get a CLEO drop and their next game roll is an auto win. If two matched players have a CLEO drop, they will roll as normal to break the tie.

We’re doing it a bit different this year. Each team member only gets one point per day of cheering. Meaning, just one posted cheer on Twitter / Facebook counts per day. This evens the playing field for everyone.

If you get someone to cheer for you that is not on your team, that cheer counts as 2 points. However, it only counts once per day per person.

The team with the most points on the Tuesday before the game becomes immune to injury rolls.

LIVE Cheering! Every week, we will be giving away YOSE codes to Fans who show up that don’t have the game.  Also, the team with the most fans at the game before the rolls start will receive one 12 roll during the course of the game.

Footballs (the American kind) signed by the Undead Labs team will be sent to all winning team members. 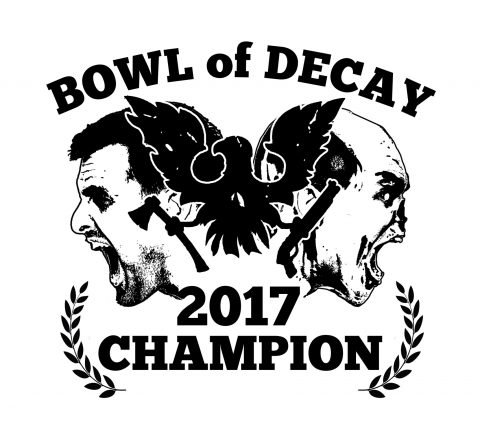 Now get out there! It’s time to DRAFT!