We can’t talk about what we’re working on, so we’re talking about the people doing the work. Krista is a member of our art team, and her work focuses on the user interface, but don’t think you can put her into a simple category.  As you’ll see, she can draw a huge range of subjects and themes. She’s like that about a lot of stuff, actually. You start talking with her on one topic and it turns out she knows ten other related categories. She’s even a martial artist on top of being a fine artist. She finds everything interesting, which is probably why all of us find her to be interesting. She brings her wide range of knowledge to bear on her work, putting in all the details that will make your experience that much better. Finally, she’s a thoughtful colleague and mentor to those who care about their skills. If you’re an artist yourself and just starting out in your career, Krista has some great advice for you. Enjoy. — Sanya

Drawing is fun, except when you make it too hard on yourself*. A lot of times, I find, people tend to put far too much time into polishing the crap out of one image, and when they finally call it “done” they’re not actually happy with the result, and thinking about diving into the next image feels like a horribly daunting task. (“I’m going to do all of that that AGAIN? UGH. WHYYY?!”)

By “they” I really mean “me” like, 10-15 years ago. I’ve spent 80 hours on paintings before, and still look at those paintings and say, “Sheesh. I could have done that SO much better now. Also, WHYYY?!”

Here’s where I embarrass myself:

Did I need to draw EVERY SCALE? FFS, no. No, I really didn’t.

And sure, it’s fine, I guess. Dragons are cool. But is one image — that took me some 60-80 hours to make — something I’d show a potential employer? Ehhhhh, let’s just say it hasn’t been in my portfolio for many years.

This, on the other hand, has: 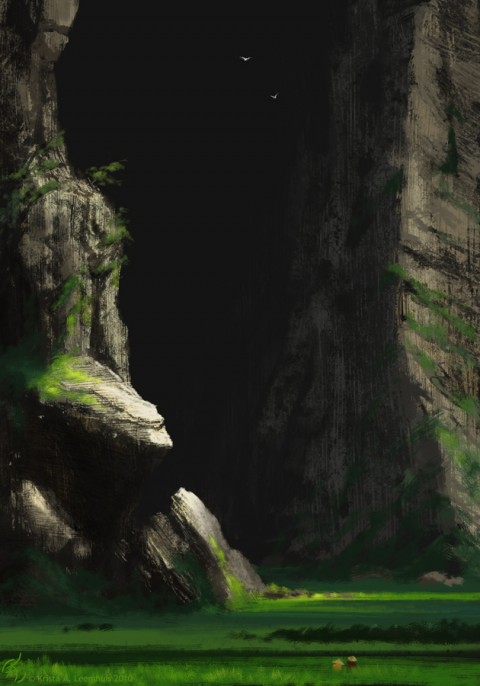 Still a few years ago, but this was about one hour of work.

Different subject matter, sure, but the point is this: Not everything in an image needs to be meticulously detailed. You can imply a great deal and let the mind fill in the rest. You just need to give enough information that the viewer’s mind can pick up where you left off.

Ask yourself: What’s the very heart of the idea I want to convey?

That’s your cue as to what needs a little bit of rendering love. The rest can probably be implied.

Some examples! (NOT of my work!)

She spent some time rendering the things around the focal point here, but as you go toward the background–heck, even the knight dude!–there’s not a lot of precision there. She gets the colors and values right, and that’s really all she needs to sell the idea.

So much of this relies on just getting the right colors in the right places. The points of highest contrast draw the eye to where it should be looking, and almost force the eye away from anything else.

Ok, but Krista, these people paint good. I only sketch on paper. HOW ARE YOU HELPING ME?

You can see the same idea (probably much more clearly) with sketches, actually.

He just puts in the lines and shadows that need to be there. Notice he doesn’t even bother with a line for the front of the model’s face; the position of the eye, the mouth, and the nose’s shadow are enough for you to interpret it as “face”. Confident lines on her back and arm, though broken, are enough to let your mind fill in the missing bits.

Note that even Mikey doesn’t bother with the hands; he was probably more interested in all those ripply muscles. (Who isn’t? 😀 ) He drew what was important to capture, then he moved on!

But, Krista, what if I’m a pro, or I want to be? I can’t just leave bits out and expect people to hire me!

Well, okay. To some extent, that’s probably true, depending on what it is you’re trying to achieve. But…you’d probably be surprised by what people get away with, even (especially?) in marketing materials.

Case in point: MY favorite promo image ever, mostly for exactly this subject:

This was a frequently used bit of marketing art back in its time. And Disney seems pretty keen on having its characters on-model, particularly for promo materials. So what’s up with poor Brooklyn there? He’s got a….line…where his wing should be? I mean…it’s like, HALF there. And only one of them! And though it’s less obvious, Broadway and Hudson are each missing a wing too.

But somehow the image still works!

Would it be a better image if those wings had been drawn in?

Actually…..no, I don’t think so. I think Brooklyn’s wing would throw off the balance and really hide a lot of Broadway, and adding in Broadway & Hudson’s wings would just create more visual noise. So I have to think this was done intentionally; it wasn’t an oversight. As such, it’s amazing what they got away with! (And it probably took me years before I even looked closely enough to notice.)

This is just cheating. You’re not even trying, Alex.

So! When you draw, focus on getting your idea down. Most sketching you do probably should be super quick. Like less than an hour. Less than 15 minutes, even. And heck, if you’re just having fun working on it, sure, shade it, render it, color it, whatever. But don’t work so long on something that it becomes a chore. It’s not worth it. There are just too many things to be drawn to spend all your time on one thing!

Draw, learn, then move on.

Also, be kind to yourself. 🙂

*This article may not be used as an excuse for not knowing how to draw certain things. Yes, you need to learn to draw hands, feet, faces, spheres, cubes, still lifes, shoes, fabric, shiny things, not shiny things, and cats. The internet loves cats.

Krista is a UI Artist. She paints, writes stuff, throws people, and occasionally dresses as an elf.