My plan; to quickly get through school and become a lobbyist for an environmental agency.

Well, that didn’t last long.  Within the first month of my college career I had thrown out every bit of tie-dye I owned and was pretty sure I didn’t really like Poli Sci that much.  I didn’t have a total philosophical transformation or anything; I was still very liberal minded, still cared about the the environment but just couldn’t get that into my Poli Sci courses.  The aversion to tie-dye (which I am happy to still have today) came from the great abundance found in Eugene, Or., and even more so from meeting actual “Hippies”.

Over the next couple of years I changed my major over and over again.  I really enjoyed most of my classes, but when all was said and done I kept second guessing myself and what I wanted to do with my life.  I went from Anthropology to Philosophy to Education and eventually landed on Humanities as a major.  A Liberal Arts degree seemed safe and just vague enough that I could use it in any number of careers, and I loved the material.

Still, something didn’t feel right with the path I chose.  I decided to take some time off from school and try looking at things from the outside and get my barring.

During that time I spent a lot of time drawing and doing art.  I had always been a doodler, spent a lot of time designing superheroes or trying my hand copying my favorite comics.  This was different though.  I became more focused, working on my own idea for a comic.  I was obsessively honing the characters, their world, and their story.

After a chance meeting with Mike Allred (artist and creator of “Madman” the comic) I had an epiphany of sorts.  While signing him up for a membership at the Blockbuster where I worked, I recognised his name and asked him about comics.  Turns out he was having quite a good day and was excited to share it with someone.  He told me, in a “hush hush” tone, that he was in negotiations with a movie studio to make a “Madman” movie*.  He even told me that they were talking to Kyle MacLachlan to play the titular role.  I told him of my interest in creating my own comic which suddenly spurred him on to run out to his car and bring in an un-inked layout for an upcoming “Madman” comic.   He was amazingly cool to share so much with a comic-loving stranger.

That night I decided to give myself a five year window to pursue comics and art.

I applied to the U of O Fine Arts department with a portfolio made up mostly of my comic book work and got in!  One of the first classes I took, that first semester back, was a woodcut printmaking class.  I loved printmaking from the start.  It took me a year and a half to to complete my degree, and a majority of my classes were in printmaking: Woodcut, Intaglio, Screenprinting, and Lithography.

Over the summer before my last semester of college I started to really think about my relationship with art.  A couple questions kept bubbling up to the surface.  What was it about printmaking that I loved so much, and what did I “really” want to do after college?

I came to realize that what I loved so much about printmaking was “the process”.  I loved working with the materials and the techniques needed to produce the final product.  I loved that the grain of the wood would influence the image and how I carved it, the almost magical process of manipulating the limestone and the viscosity of the ink, and heating copper plates with pine sap to get the perfect gradation for an intaglio print.  It was the process, the road taken, that I enjoyed.  In some ways I was more of a craftsman than an artist. And I was okay with that.

At that same time, I was in contact with one of my good friends from college who had already graduated and was working as a Level Designer in San Francisco.  We had been roommates off and on through college and would play tons of games together, both video and table-top.  We would talk a lot about game design and how amazing it would be if we could be game testers.

He told me that he thought he could get me an interview for a Level Design position if I was interested, which I was!  He visited Eugene just before summer ended and brought up his PC with a copy of “3D Studio R4” installed.

I spent the next months juggling my remaining courses, working at a pizza shop, and learning how to build using a 3D program.  It was a little daunting but so much fun.

Needless to say the interview went well and I got the job.  Turns out that making games is also all about “the process” too, at least for me it is.  The final product whether it’s an image or a game is paramount but it’s “the process” getting there that I still enjoy the most.

*Note:  Sadly the “Madman” movie was never made.  Kyle MacLachlan would have been perfect as Madman! 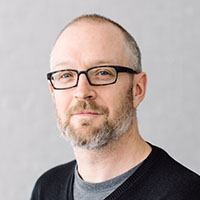