We can’t talk about what we’re doing, so we’re talking about the people doing the work. I’m biased about Nicole, because we’ve known each other for ten years, as we both cycled between freelancing, journalism, and community management. When it came time to double the community team (from one to two people), I knew we needed someone who would care about members of our community as individuals and not as shallow “likes” to be collected. Someone who would be honest and kind and no-nonsense. Someone who’d been there and done that and come out the other end devoted to serving a community, instead of using community to achieve other personal ambitions. We’ve got that person in Nicole. Read on for her story. — Sanya

Settle in, kids, and get comfortable for story-time.  This is where I tell you about being a Community Manager. 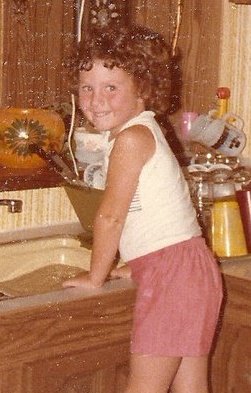 Look at that bright and shiny face. When I was still young and impressionable, the world was my oyster and I knew that anything was possible. At this phase of my life, I really wanted to be a firetruck or a cowgirl. Because big red engines and horses were cool. Hell, at this point I really just wanted to be tall enough so I could help my grandma with the dishes. Even then, I liked being really helpful.

But as I got a bit older, I realized that there was more to life than being a firetruck. In no particular order, these are the things I wanted to do with my life; Lawyer, Police Officer (Forensics), Writer, Psychologist, crew member on the Starfleet Enterprise.

You’ll note that Community Manager isn’t on that list. When I was picking and choosing from the smorgasbord of careers, there wasn’t anything like this available.  As a matter of fact, it wasn’t until the advent of online games that CMs were even a thing.

Oddly enough, when I look at that list, I realize that I ended up being a combination of all of those previous choices. (With the exception of the crew member, of course – but if you know how I can get in on that job, shoot me an email. Let’s talk.)  On the regular, I mediate (lawyer), I analyze and police (cop), I write stuff like this (writer), I empathize and nurture (psychologist), and sometimes I even get to do damage control (firetruck!).   Not many people realize what I actually do though. 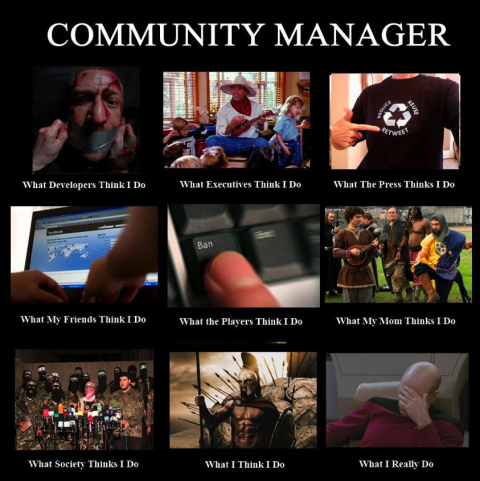 When I tell people what my job is, I tend to hear, “Oh my God! That’s so cool! How do I get a job hanging out in my pajamas and trolling forums?”

Always answer the question you wished that they’d asked. But full disclosure, most people don’t get to telecommute. I just got really lucky.

How do you become a Community Manager?

Well, first: It’s not for everyone, and I can be very brutal in my descriptives. I start by telling them some of the worst of my war stories. (Like someone telling me to kill myself to save the company the effort of firing me. Yeah, true story.)  It’s important to make sure that the person asking has a solid grasp on what they can expect.  Because as a Community Manager, you will at some point get called names your grandma would stroke out at hearing.

You need to have a very specific personality that allows you to roll with the punches and pop back up with a laugh and a smile. Sometimes that smile is wry and the laugh is a little bitter, but at the end of the day, you have to be able to turn around and get back to it.

Once I’ve put the fear of Zuul into the people asking, I tell them how I did it.  Back in the early ’00s I started writing for the Horizons Vault (part of the now defunct Vault Network). From there, I became an editor on three other Vaults, and then moved on to other gaming media websites. You may have even visited Ten Ton Hammer, where I spent the bulk of my time and started developing relationships with the developers…developers  for whom I eventually ended up working.

In 2007, Scott Brown (then President of NetDevil) asked me if I’d ever been interested in becoming a community manager. I was absolutely interested. I’d been doing a form of community management for years. So I said “Golly! Would I!” (Okay, I didn’t actually say that specifically, but the concept is the same.)

A few months later, I had the job. Since then, I’ve worked on AAA games, indie titles, and even *gasp* a non-gaming community.  (That was the worst, by the way.)

Actually, when Undead Labs announced that they were making a Zombie game, I recall saying to a friend, “I want to work for them! I can’t imagine a cooler concept to work with.” So when Sanya asked if I’d be interested in joining the community management team, I said “Hell yes I am!”  And the rest, they say, is history.

Wait, someone said that to you? That sounds horrible! Why are you a Community Manager?

Oh, that “Go kill yourself” comment? Yeah, that wasn’t even the worst one. It can get pretty ugly being the person that everyone has access to. So, why do I do it? Hold on, let me show you. 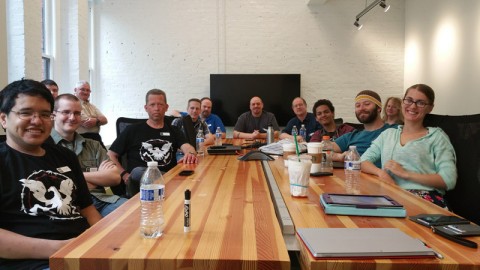 These were your Undead Labs Ambassadors this year. And if you look, you will see a perfect cross section of humanity. And even though they started out as strangers, they became a type of “family” by the end of the trip.

Watching the magic happen makes my job absolutely worth it. Whether it’s at a convention or on our social spaces, when people connect over their common passions, it’s miraculous and amazing.

Most people have a relatively homogenous social circle. You will find peers with a lot of common interests and you’ll  stick together like little cats on a raft in the middle of the pool.  That’s normal, because that raft holds the safety and comfort that allows you to be yourself.

When you become a part of a larger social community, you suddenly find yourself a situation that forces you to find commonalities with people way outside of your safety zone. It doesn’t always go so well. But with a bit of scrambling, and some awkward social posturing, as a group you discover that you all like the one thing, so you all can coexist in relative peace.

Then, out of sheer boredom or brave curiosity, you may strike up a conversation on something that you like aside from that common interest.  Suddenly, you and your strange new friends will start talking about X, Y or, Z and you’ll discover that you have other things in common too.

Trust is built, and friendships are made.  When someone says, “Oh you like this too?” that is when the magic happens. Because, you’ve made the leap from complete stranger to potential new friend.  Strong relationships are built within these communities and some of them will last for years beyond that initial interest. I bet a nickel that some of you will still be in touch with each other twenty years from now because you dared say hi in the Undead Labs forums.  Heck, I still have friends from my EverQuest days.

That is why I love being a Community Manager. Nothing makes me happier than seeing people find friends that they never knew they were missing. The connections made are magical and seeing it makes up for anything else that I have to deal with on any given day.

Now that I’ve gotten sappy, it’s time for another meme.

That’s another great thing about my job. I can communicate exactly what I need to say through memes.