We can’t talk about what we’re doing, so we’re talking about the people doing the work. Meet Nicco, whose can-do attitude manages to stand out on a can-do team. I first met him in person when he literally got off the plane from his honeymoon and went straight to the PAX show floor to take his turn demonstrating our games. Making games is a breeze with guys like that pulling for the team. Read on to see how he got into the industry:

Hi, I’m Nicco Simone and I’m a programmer here at Undead Labs. My experience in the industry is limited; in fact, this is my first job! Coming onto the team here is a dream come true for me, and the story of how I got my foot in the door is a bit surprising.

I started teaching myself to program after high school. Searching the internet for “how to program a computer”, or some other naïve search phrase; I repeatedly came across message boards that said a language called C++ isn’t beginner friendly, and should be avoided. So, I went onto Amazon and bought the “Big Blue Book” (C++ Primer Plus).

Hacking my way through that book was one of the best experiences of my life. I wasn’t making an app or trying to solve some external problem. I was just learning, completing all of the exercises at the end of each chapter. Watching a command console spit out correct answers to mundane problems was surprisingly gratifying. Finally, after making a sizeable dent in that book, I was hooked. I decided I wanted to get my CS degree in hopes of becoming a professional developer. Lucky for me, there was a great school right in my backyard.

I started attending DigiPen in Fall of 2010. There’s a strong focus on project teams at the school. Every year, students organize into teams to build a game. There’s been a lot of incredible projects that have been developed. When I initially started, I had two goals. One was to get on a serious team (not just trying to pass the class), and the other was to be the graphics programmer on that team. I met both those goals my junior year.

At the end of my sophomore year, I finished building my first 3D renderer (a deferred shading renderer with a post-processing pipeline to be exact), and it was one of the most difficult projects I’d done. At the time, there wasn’t a lot of information on the topic, and finding example code was near impossible. Debugging graphics problems is also an inimitable skill I learned the hard way. Debugging graphics is unique, because many times, there isn’t much context for what’s happening. It’s a lot of math, and math errors don’t always lead to tangible machine errors (they’re diagnosed by looking at pixels on a screen). However, the experience I gained from building this renderer was something I took into my junior year, and applied to my next game team.

At the beginning of my junior year I joined team Glass Cannon. It was a fairly big team filled with talented students. Locked in as the graphics programmer, my goals were coming to fruition. Over the next year, we developed Grand Theft Flying Object. We showed the game off at PAX, and it even had some German Let’s Plays on YouTube. We were fairly successful with our student efforts.

I woke up Thursday morning to a phone call from our producer on the team, Josh. He told me that the governor of Washington was headed to DigiPen today and that the school wanted us to show the game to him. He also mentioned that the governor would be “rolling through with a posse from the game industry.” Excited, I jumped out of bed and met him and the rest of team at school.

We set up a 60-inch flat screen in the main lab of the school to show off the game. The local news was there and as the governor approached, they took shots of us playing the game. Josh talked for a moment with the governor about the future of the industry, got some photos with him, and then they slowly made their way out.

Everyone, except one person who was still checking out our game. He was definitely someone from the industry but we couldn’t identify what studio he was from or how he was involved. He was asking us a lot of intelligent questions about how we made the game. After the somewhat shallow experience with a news crew that had told me to “press the buttons on your controller really fast” for a shot, it was humbling to see a person truly interested in what we created. Someone finally asked who he was.

He said his name was Jeff from Undead Labs.

I instantly freaked out and became a bit star struck.  I am a huge fan of State of Decay. It’s one of my favorite games. When I first started school, I had read about a new studio (Undead Labs) developing an open world zombie-survival game. I remember reading that article and thinking to myself, “I would love to work at a place like that someday!” I was overly excited.

He said they weren’t hiring at the moment but to stay in touch. I did. The next day, I wrote him an email saying how great it was to talk with him and taking the time to check out our project. From there, we had a few more emails that eventually led to lunch, interviews, and my dream job.

I’ve been at Undead Labs for over a year and a half now, and it’s been the best time in my life. Since I started, I got married, bought a town house with my wife, and have grown as a developer, learning from some of the best in the industry. My grandfather use to tell me something that I always admired and wanted for myself. He would tell me, “When you love what you do, it doesn’t feel like work.” I found that here at Undead. 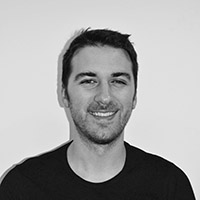