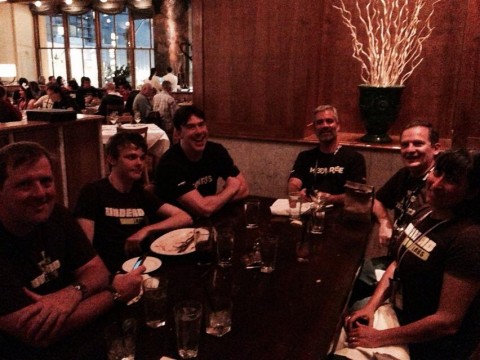 Has it really been three weeks since PAX ended? It seems like just yesterday Drew Hobson (the voice of Marcus) was cheerfully saying “niiiiiiiice” on request, and revealing his other role on State of Decay. J.L. Bourne was only a few hours ago signing autographs in our booth and telling stories during the Superfan prize dinner. I feel like we were just standing in a crowded room, telling people that as a matter of fact you’ll be able to play as Sasquatch in the Year One edition of State of Decay. And it sure feels like I was very recently sitting on a convention center floor scribbling notes, while over my head Jeff and Foge were designing a PVP tournament for Moonrise. 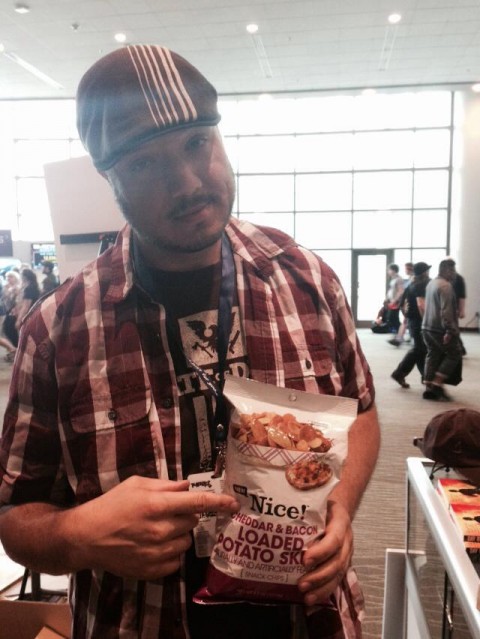 Brant isn’t in the picture because he’s taking the picture, but what you’re seeing is the Superfan celebration. We are the luckiest game company on earth, I have to tell you. Our Superfans were supposed to be treated like royalty in return for all they’ve done…and instead they did more. They met us at the crack of dawn at the company HQ to load boxes. They helped set up the booth. And even though they had four day badges to see the show, every time I turned around one of them was doing a demo of the game for new players. (Our Negnar did step away from the Undead Labs area long enough to try out the new game, and he wrote up his experiences here.) I hope they had as much fun as we did. I mean, we are grateful to all of you for being part of the community, and meeting some of you in person is SUCH a thrill. 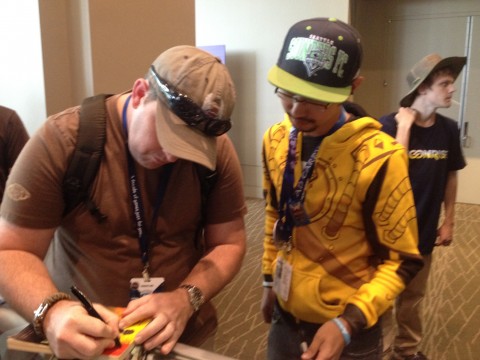 Speaking of meeting in person, here’s Drew! He signed shirts and hats and recited any line you wanted. “Niiiiiiiice” was a popular request. As befits a guy who is a professional DJ as well as a voice actor, Drew was the life of the party. It was great watching people come up to talk about the game, and then realize that “Marcus” was standing right there. What they didn’t know, and Drew was able to reveal, is that he’s also the voice of Sasquatch. Sasquatch, who will be a playable character sometime early next spring. We’ll be working with Drew until Hollywood comes calling for this guy.

Fans of J.L. Bourne (he whose novels were such an inspiration to us during the development of State of Decay), you will be glad to hear that he is EXACTLY the guy you want beside you if the apocalypse happens. He doesn’t just spin a pretty story. He thinks tactically at all times. It was an education watching him make plans and contingency plans, and more than once I got a little shiver and thought, boy, glad we’re on the same side. He’s also a hard worker, thoughtful, honest, and damned funny. We are so lucky to have him working on the future of the game. Wish I could talk about that future… 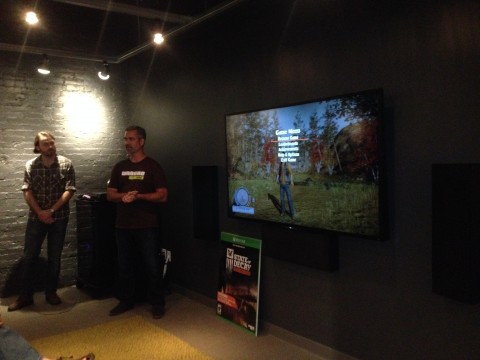 In the immediate future of State of Decay, and what we can talk about, is the Year One Survival Edition, which I would really like everyone to abbreviate on Twitter as “YOSE” instead of the cringeworthy “YO.” Seriously, if you could please hook me up, I will pay you back at the first State of Decay live event. Drinks, swag, something. Okay, moving on. Although we weren’t ready to show it at PAX, we did talk about it at our press event the night before the show. Major Nelson made a horror movie about it. Gamespot saw it in person. So did Ten Ton Hammer. Some big sites wrote about it. And it wouldn’t have been a media event without some of the writers who’ve been there since the beginning.

Highlights include, but are not limited to: Remastered in 1080p. New mission type (“Cleo Drops” – military looking crates that contain rare and powerful goodies…but they seem to attract a hell of a lot of zombies). New playable Heroes from Lifeline — Hawkes, Kilo, Vance, and Sasquatch. New SUV, new weapons, new music. The facility goodies (snacks, ammo) from Lifeline will be retrofitted into the whole game. And to be honest, we’re not done.

YOSE will bundle all of the DLC into this package, to make THE definitive version of State of Decay. This generation of it, anyway. We’re still talking about ways to thank those of you who bought the original game but might want to upgrade, so, stay tuned.

And of course, there was Moonrise. PAX was our first chance to see real players interacting with our alpha build. As you regulars know, our PAX booths are never staffed with temps or marketing people. Every demo is given by someone who is actively working on the game, and really, REALLY cares if you’re having a good time. So, this show was big for us.

With fourteen demo stations, we figured the line would move so fast that there wouldn’t be a chance for much of a line to form. We were…pleasantly surprised. We were freaking delighted when one of the PAX people came over with a roll of tape to mark out where the overflow could go — around two sides of our booth! — without pissing off the fire marshal. 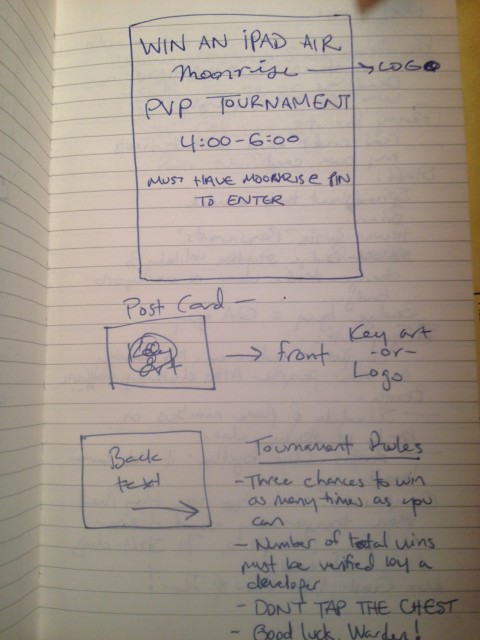 And then there was the line on the OTHER side of the booth for the tournament. After the show started, Jeff and Foge (the Design Director, BTW, you’ll be hearing more from him soon) looked at each other. They had a gleam in their respective eyes that I have learned means nothing but trouble. “Man, people don’t get to the PVP during the demo. That’s the best part,” one of them said. One thing led to another, until I was sitting on the floor of the booth taking notes while they worked out the rules. At the end I held out my notebook. Jeff took a picture of the page and disappeared. He came back a few hours later with two posters, four iPad Airs for prizes, and a few thousand postcards with the rules.

The tournament was EPIC. Nothing is more fun than PVP. Check out the pictures on the Moonrise Facebook page. And if you don’t believe it happened just the way I’ve described:

As usual with our games, Moonrise is damned hard to boil down to a simple slogan. Early next month we’ll start a series of design articles that will show you what all went into crafting this beauty, and I’ll post a more complete press roundup next week. This post is already crazy long, so in addition to Negnar’s post, for now you can start with MMORPG: “[C]heck out Moonrise, a real-time combat RPG that really made the obsessive compulsive gamer collector in me get excited.” And hey, why not GamersInBeta: “Besides the intuitive game play, what was most impressive about the title was how quickly you forgot about the medium you were playing on as you were so immersed in the story and action.”

If you want the news as it happens, be sure to follow us on our various social media things. We’re @undeadlabs on Twitter. We’re cleverly disguised over at Facebook. Although we don’t have the State of Decay tags on either Facebook or Twitter, we share the Moonrise tags with the people at Kabam: @moonrisemobile and http://facebook.com/moonrisemobile.

Please do keep track of us. We have something really neat to celebrate with you in the near future, and I don’t want you miss any of the fun.