Every game released on the Xbox 360 must comply with a series of Technical Certification Requirements, or TCRs. These requirements have nothing to do with the actual game — whether it’s fun to play, whether the art is beautiful, the music compelling, or the mechanics well balanced and interesting. Instead, they specify requirements for how games interact with the Xbox hardware and software. For example, there are TCRs stipulating how a game must handle a controller being disconnected, or what to do if the player logs out, or if the storage device becomes unavailable. There are TCRs that stipulate the maximum amount of time you can be in a loading screen without showing something interactive or entertaining (e.g. hints, videos, etc). There are TCRs mandating minimum framerate, and stipulating text must be legible on standard definition televisions. There are TCRs that stipulate proper terminology and spelling for the Xbox controller buttons (e.g. Start, LB, RT). In short, TCRs ensure a baseline level of quality and a consistent way of handling events.

TCRs are A Good Thing, because they protect the value of your Xbox and ensure a poorly coded game can’t delete all your save games or brick your box. That said, there are several hundred of them, some of them clear and relevant, and others somewhat vague and dated. The current list represents 12 years of Xbox development evolution, and if you think about the way the current Xbox 360, with its HDMI ports, Kinnect sensors, and cloud saves, compares to the original Xbox of 2001, you can understand how some of the older TCRs might be a bit harder to map to modern game development.

But, we don’t get to pick and choose which TCRs we care about buffet style. Every game published on the Xbox 360 — whether it’s a retail game on disc, or a digital game for Xbox LIVE Arcade, published by Microsoft, or another publisher such as EA — must pass through the same certification gauntlet.

The certification process is divided into three discreet phases: Build Verification Test (BVT), Compliance, and Functional. You start at BVT and move through each phase, one at a time.

BVT is a suite of tests designed to ensure the game is packaged correctly for the Xbox system and executes properly. It ensures all Achievements are in place with proper point distribution, Avatar Awards are properly referenced, and Leaderboards are properly integrated. It checks that all supported language files are in place and loadable. In short, this phase is a sanity check before committing a large number of real live human beings to the next two stages.

Compliance is the doozie. In this phase the game is tested against all TCRs. If any fail, it’s deemed a Certification Failure Event (CFE) and your game gets booted out. There is a formal challenge process in which you can ask for an exception to the TCR, but exceptions are rarely granted, and only under very specific circumstances. Usually you have no recourse but to fix the issue, test it, and resubmit, which starts the entire process from scratch. That’s an important point: you can’t fix it and pick up where you left off. Every resubmission starts from the beginning. Developers often refer to this phase as “TCR hell”, and indeed it can be quite rough on smaller developers who do not have experience with TCRs. We’re fortunate for two reasons: First, several of our programmers have been to this rodeo numerous times, so we were on top of the TCRs from the start; and second, our excellent production team at Microsoft was able to get us in for several pre-certification tests, which is to certification what a dress rehearsal is to a play.

The final phase is Functional. This is the phase in which the certification team is actually playing the game. They’re not making qualitative judgements, but instead simply ensuring the game can be played, is completable, and fulfills the gameplay description provided by the developers. While not impossible, it’s far more rare to get booted from certification in this phase.

One important thing to keep in mind is the certification process, unlike quality assurance, or QA, is administered by the Xbox 360 team — the platform holder, rather than the Microsoft Studios team — our publisher. Our publishing team has no more influence on the process than any other publisher in the industry. Everyone has to play by the same rules.

So, now you know everything you ever wanted to know about the certification. But what you really want to know is what it means for State of Decay!

I can tell you that as of yesterday, State of Decay passed through Compliance and into the final Functional phase of certification.

So what does this mean? It means it is more likely the game will complete certification. While we don’t have a definitive timeframe to complete Functional testing, our hope and expectation is it will be early next week. If that happens, and if the game does not fail certification, then we may indeed meet our target date. It’s widely known XBLA updates on Wednesdays, so if we miss that target date, we’ll retarget for the following Wednesday, and keep at it until we get it done.

In short, our release date will be the first Wednesday after we clear certification, and right now we’re hopeful that will be June 5.

One more note on this: If the game does fail certification for any reason, it’s not due to evil publishers, government conspiracies, or greedy developers who for some reason think they’ll make a lot of money by delaying the release of the game. It just means somebody was doing his job, and found a serious bug nobody would want to see go live to 20 million players.

Whew. Now you know what I know, and what our dedicated team at Microsoft Studios knows. I promise we will let you know the very second we get notice State of Decay has cleared certification.

After that, our job is not done. We have a PC build of the game to finish and deliver. We will certainly want to fix a few bugs that slipped through (we saw a few in the video streams today that we jumped on immediately). And we have super secret plans for a few other treats to roll out in the future that Sanya would shoot me for even mentioning.

To all of you who have joined us in the past few months, and especially to those of you who have stuck with us for the past few years: Thank you, from everyone at the Lab. Your support and enthusiasm has helped us through the ups and downs as we wrestled this huge, awesome beast to the ground. And now we’re almost there.

Hear that? Hang in there. We’re almost there… 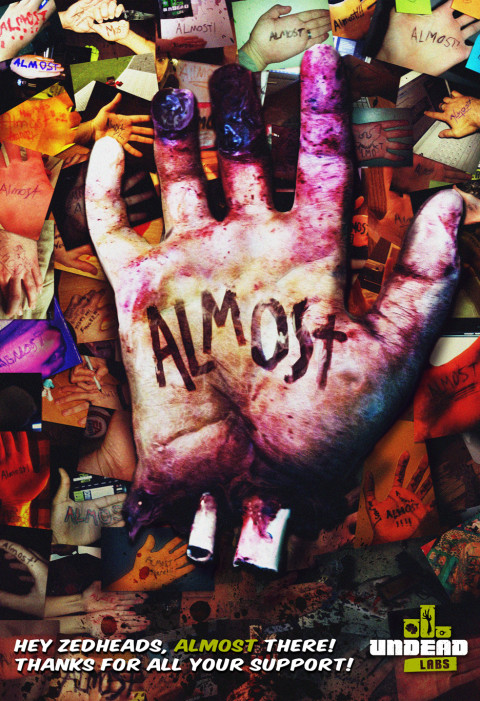