If you’re a horror fan, I’m sure you’ve watched zombie movies and thought “I could survive a hell of a lot longer than those guys”. After all, you’re prepared for this stuff — you’ve got a baseball bat  by your door, a survival kit in your closet, and a plan. That’s great, but won’t do you much good if you’re not home. And it’s not like the zombie apocalypse is going to send out a Facebook invite in advance, which means that most of us would have no idea where we’d actually be when shit hit the fan.

Take a look around. It’s pretty crazy how many places would completely suck to be in or around if zombies started running (or shambling) around — no matter how prepared you think you are.

Case in point: It’s my job to think about this stuff all day, but this weekend I found myself in a situation where I’d have been zombie chow if things went south. 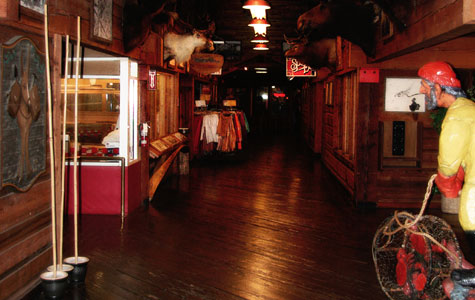 I was walking around on the waterfront, enjoying the first sunny day we’ve had in months. On the hunt for a restroom, I ducked down a random hallway and wound up discovering a one-room indoor carnival, complete with a full-sized merry-go-round, arcade games, skee-ball tables, ticket counters, and one of those creepy animatronic fortune tellers. The narrow aisles between attractions were packed with people. Circus music warbled from the old carousel.

If you looked up the term “Americana” in the dictionary, I swear you’d find a picture of this place. 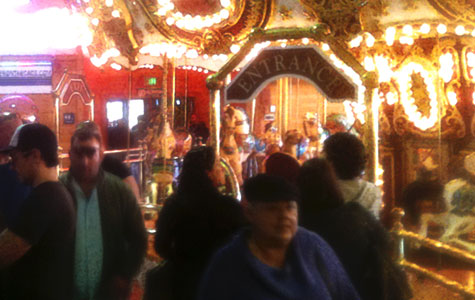 I pushed my way through the crowd and found a locked ladies’ room tucked away in the back of the room. Punching the unlock code into the keypad, I headed inside. The minute I sat on the toilet, the door started rattling and shaking. Someone was trying to get in, and apparently hadn’t noticed the huge lock on the handle. Then I realized that there was an even louder rattling in the distance — like a group of people were trying to shake open another door (which was blocked with chains). I looked around and noticed that there were no windows in the room, and the ceiling was too high for me to reach, even if I stood on something.

Then it dawned on me that my situation was exactly why Rule #2 was created (or, for the Zombieland lovers, Rule #3 in the actual movie). If zombies were responsible for all that shaking, I’d be completely screwed.

Luckily, the chaos was caused by other (living) people, but the experience made me think — what other places in Seattle would suck to get stuck in during a zombie apocalypse? On Monday, I asked the rest of the team where they’d least like to wind up. Here are our top five picks:

If you’ve ever been to Seattle’s famous Pike Place Market, you’ll know that it’s always packed. You may also know that the place is a freaking maze — even for locals who have been there dozens of times. I get lost every time I go to buy comics, and Brant has a great story about the time he accidentally went out a side door and ended up on a street somewhere down by the waterfront. 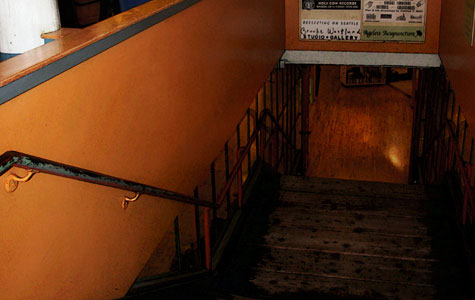 Between the sheer number of people trying to navigate the narrow halls and the fact that you’ll generally get lost at least once every visit, Pike Place ranks high on our list of places we’d never want to be during an outbreak.

Here’s a strange fact for you — a huge chunk of modern-day Seattle is built on top of the ruins of old Seattle. In 1889, an accidental fire destroyed 25 city blocks, including the area of Pioneer Square that the Lab calls home. You can actually go on a tour that takes you down into the sprawling network of underground tunnels, which are actually the old streets of the city. 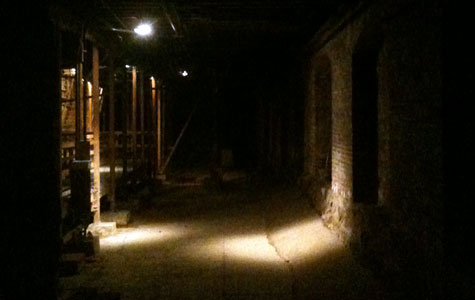 While the underground is a cool place to check out, the paths are narrow and dark and there are a limited number of exits… Let’s put it this way: anywhere that looks like the cellar from The Beyond is a bad, bad place to be trapped with a  bunch of flesh-eating ghouls.

Seattle’s iconic Space Needle is a massive 605 foot tower that was built for the 1962 World’s Fair. It’s also a huge tourist destination — every day, thousands of people pay to go up the elevators to get a panoramic view of the city and its surrounding mountains. 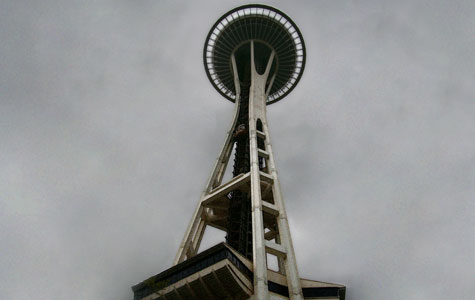 I’m afraid of heights, so the place scares the crap out of me even without zombies — I couldn’t fathom what it would be like after an outbreak. If the first infected person happened to turn at the top of the tower, you’d be trapped up there like a fish in a ridiculously elevated barrel. If the infection started outside, you’d be hovering above one of the most crowded tourist destinations in Seattle. You could try taking the elevator down, but it’s going to ring like a dinner bell when it hits the ground floor. Either way, no thanks.

Since Seattle is pretty much surrounded by water, there are a TON of boats, ships, and other things floating around. We’ve got ferries shuttling cars and people to nearby islands, massive cargo ships hauling containers back and forth across the Pacific, fishing boats coming in to drop off their catches, cruise ships stopping here every summer, and thousands of people that own boats ranging in size from kayaks to yachts. 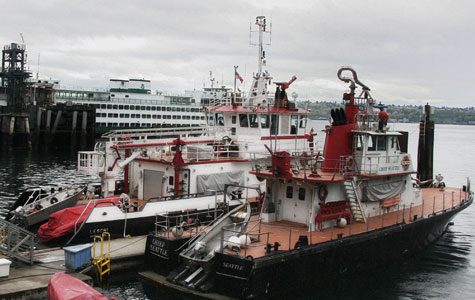 On a small boat, there is nowhere to run, and on a larger ship, there’s a whole other set of complications. It wouldn’t take many zombies to turn shipshape into total chaos, and without the crew in place to keep the ship from running aground or sinking in a storm, your fantasies of escaping the zombie apocalypse by taking to the high seas aren’t likely to end well. So unless you’re prepared to take out every single zed on board and take control of the ship, you’re probably jumping into the freezing water and swimming to…Oh yeah. Zombie infested shores. Good luck with that!

Nestled in the heart of downtown, the Washington State Convention Center is home to most of Seattle’s major conventions, like the Penny Arcade Expo (PAX), the Emerald City Comicon, and Sakura Con. With over 300,000 square feet of space, this six story structure could hold a hell of a lot of zombies.

I was at ECCC this year, and on the busiest days, I could barely make my way through the crowd. And as packed as that show was, PAX had almost 70,000 fellow geeks in attendance last year. That’s like a small town crammed into a single building. Zombify a bunch of people and just picture what would happen…

So that’s the question — if the zombie apocalypse happened tomorrow, would you be in a safe place? Or would you be like me, holed up in a windowless bathroom in the back of a crowded indoor carnival?

We think about this stuff all the time. How do the all those everyday, normal places change when you’re suddenly faced with a zombie outbreak?

Now it’s your turn — take a look at the spots you regularly visit, then figure out places in your city or town that you’d want to avoid in the case of an outbreak. Then, share your ideas with us. And remember that pictures are awesome, so try to link to shots of locations so the rest of us can see what you’re talking about. We’re looking forward to reading what you guys come up with!

Have a safe weekend, everyone!