In celebration of St. Patrick’s Day, I’m going to augment the Flogging Molly we’re rocking in the Lab and introduce you to resident Irishman and all-around badass technical artist, Dave Dunniway.

I met Dave back in 2003 when I was looking for experienced 3D artists for Guild Wars. At that point we had the core of an amazing art team, but I was looking for someone special; someone who could not only model and paint, but who could also figure out how to make things work. More specifically, someone who could build things, break them apart, and then put them back together again. When I looked at some of the work Dave had done for Dungeon Siege, I knew he was our guy.

Sometimes, you just have to blow shit up. And when that time comes, you want a guy like Dave on your team. 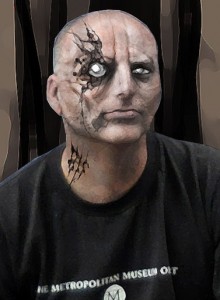 It takes a team of talented artists and animators to create a beautiful world and make it feel alive. But players want more than beauty. They want to interact with their environment; to feel like they’ve left their footprints in the sand, or their graffiti on the walls. They want to see the flaming ruins of a gas station that had the poor taste to get in the way of their gun sights. They want a world that reacts and changes as they move through it; more than a pretty backdrop for combat with wandering monsters.

That’s what Dave does: He turns game art into toys for us to play with. And then sometimes he blows them up.

I had the pleasure of working with Dave for seven years on the Guild Wars games, where he quickly became the go-to guy for interactables, breakables, destructables, and any other “ables” we could think of.

When we started laying our plans for the ultimate zombie-survival world at Undead Labs, I knew we needed a veteran technical artist who could make sure that the world of Class3 was not only beautiful, but also a blast to play in. You can imagine my pleasure to wake up one morning last summer and find an email from Dave with the subject, “Zombie-slayer reporting for duty!”