The key to survival is being prepared, and part of prepping for any disaster — whether it’s a natural one or the zombies-trying-to-eat-your-brains kind — is ensuring that you have the right supplies. After all, when all hell breaks loose, you probably won’t be able to swing by your local grocery store to pick up all of the stuff you forgot.

Many survivalists think ahead and create special disaster supply kits. Generally referred to as “bug-out bags” or “GO bags”, these portable collections are meant to hold about three days worth of supplies. In the case of an actual zombie apocalypse, it’s likely that you’d need more than that, but three days is a pretty good start.

Due to the number of actual living people already roaming outside our building, I’m fairly certain that the Lab would be one of the last places I’d want to be if zeds start walking around. Despite this, I got to thinking; if we had an official bug-out bag here at the studio, what would be in it? And what would everyone contribute to it?

I decided to find out.

Jeff kicked off the discussion by throwing in the towel. No, really. As he put it, “I’d take a towel. Seriously. Towels are so freaking useful. Extra warmth. Something to sleep on or under. Sweat rag. Sun shade. Make-shift carry bag. Gag. Tourniquet. Flag. Sound dampener.”

Maybe Douglas Adams was onto something after all.

After that, everyone jumped in with more conventional survival gear. Several folks suggested bringing outdoor items like small tarps, ropes, coils of 550 paracord, and dry bags for grabbing supplies on the run. Being practical (and realizing that I’m usually the first person to get hurt on a hike), I added a first aid kit and some extra bottles of Tylenol, ointment, and bandages. After all, it would suck to have to deal with some weird infection from a cut when you’re trying to keep yourself from becoming lunch.

I also recommended bringing a small bottle of bleach to sanitize drinking water and clean gore off of equipment (and people). Kevin spoke up and said that we should just bring a small water purifier, since it would last longer. And as much Kool-Aid as we can carry. Wait, Kool-Aid? Ohhh yeaaah. He wasn’t kidding, though. “Having been on backpacking trips where water wasn’t just scarce but nasty tasting,” he said, “ a nice pack of Kool-Aid, or any kind of powdered drink mix, does wonders.”

Steve agreed, then grossed us all out by explaining “Zombiepocalypse = bad; zombiepocalypse + diarrhea = worse.” Luckily, Dave already had us covered there — one of his other contributions was “Lots and lots of toilet paper.” Ew.

The conversation went downhill from there, but I’ll spare you the details.

Once that was out of everyone’s system, we debated how we’d stay warm. Shaun rattled off a list of clothes he’d bring, asserting “Nothing would be more embarrassing than dying from hypothermia during the zombie apocalypse.” Most people mentioned bringing lighters, and Brant, our resident survivalist, took it a step further and recommended one of those Blastmatch portable flints.

Steve then suggested packing a set of Mylar space blankets, and Dave thought it would be a good idea to bring a backpacker’s sleeping bag. I’m thinking that we’d probably want to consider taking a few of these; I don’t think one bag is going to cut it for all of us, even if Jeff did decide to sleep under his towel. 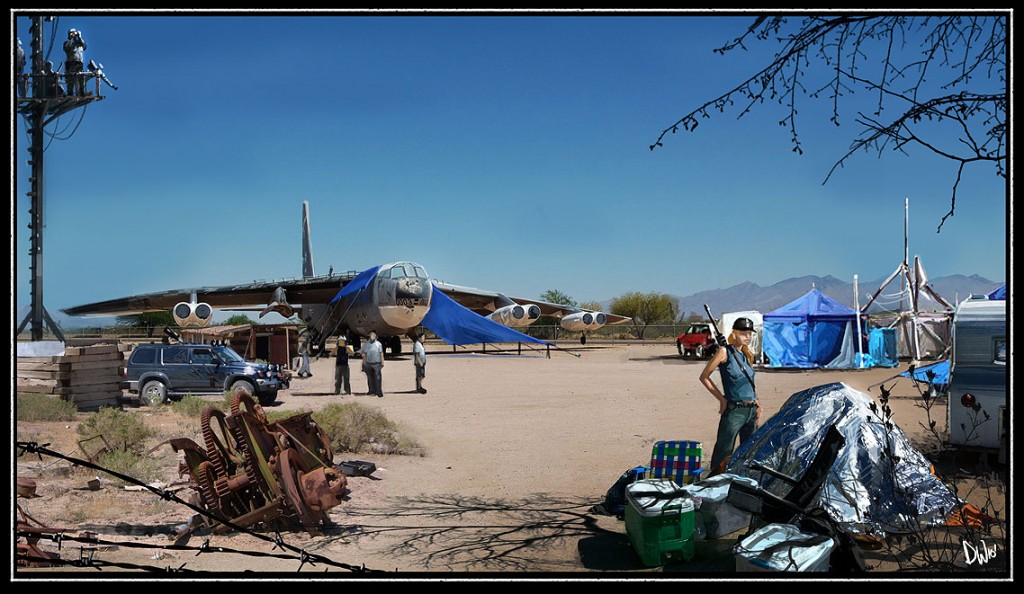 Alright…enough of the regular survival stuff. We’re preparing for the flesh-eating undead, so let’s look at everyone’s favorite must-have: weapons. It’s funny how much our choices tell you about us.

Just when we thought we were done, Brant decided to top us all with a 134 line spec that included phrases like “62 grain Mil Spec. preferred, 55 grain acceptable,” “1 Assault Harness (capable of carrying a minimum 6-30 rd magazines),” and “Lightweight Sporter w/ collapsible stock.” I have no idea what any of this means, but I’m not about to argue with him.

Wow. That’s a lot of stuff, and I didn’t even cover all of the suggestions. Maybe we’ll need a few bug-out bags to hold everything…

Even though it’s a lot of fun to think about survival in the context of the zombie apocalypse, having a real-life disaster plan is a smart idea. Want to check out the rest of our bug-out bag supply list and share your thoughts on what you’d put in yours? Head over to MMOZed and join in the discussion!