The Humvee was surrounded. They seemed to know that vehicles sometimes contained a tasty, gooey center and were always eager to examine ones they had not seen before. Well, it may have been the fact that there was a steady stream of gore sluicing off the bumper, evidence of the last group I’d come across on my drive to this location.

They saw me as I stepped out of the shattered glass doors of the Sheriff’s station carrying a duffel bag full of pistols. Like an idiot, I’d just walked right over the pile of glass, too caught up in the elation of some new firepower to exercise proper sound discipline. Mac followed me outside and gave me the, “machete or shotgun” look. I dropped the bag and replaced it with my twin .45s. He got the message and it was game on.

In the end, he did get to use the machete; his 12-gauge lay at the entrance to the station, empty. My pistols were dry and I finally let go of the table leg I’d used to bash in the head of the last of them. We’d done a little redecorating. Mac was more nervous than happy; the gunshots were bound to attract any zombies in the neighborhood, and upon returning to the Humvee, his fear was realized.

The odds were now roughly fifty-to-one. I got the “we should have used the machete look” from Mac as we grabbed the bag of guns and high-tailed it out the back. I remembered seeing a beat up panel van around the corner that’d at least get us home.

Welcome to the game that plays in my head each night.

I just wrapped up a 15-year game art career because of these visions. Someone once used a word to describe my condition: Vidiot.

My best friend’s father, a doctor, had just bought the first Mac with the black and white drawing program which I was currently using to make pictures of barbarians beheading all manner of bad guys. 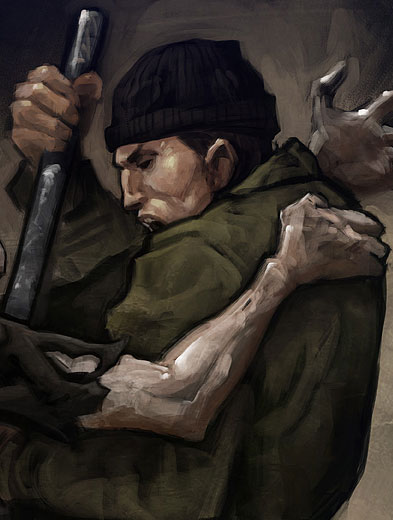 He looked at my first foray into this new art tool, frowned and said, “you are a vidiot”. He didn’t have to explain himself since I’d been hearing adults complaining about how I was wasting time in front of the Atari or getting chased out of the Evergreen State College computer lab where I played a space exploration game based on Star Trek on machines larger than my current car. As an artist, I saw the incredible possibilities of the electronic art form opening up in front of me. What they didn’t know, or possibly comprehend at the time, was that I’d found my calling. The rest of grade school, high school and university seemed like a waste of time (I still went to all of them anyway).

After a string of pretty strange jobs, the Army was where I ended up, looking forward to a career as an Infantry Officer. Weapons, small unit tactics, close quarters combat, and helicopter assaults were the stars in my eyes until an undiagnosed medical condition ended the escapade before I made it to active duty. I never lost my interest in the military, though I did lose some hearing in both ears; the left due to a training grenade and the other due to an M60 that some fool fired over my shoulder during an ambush. I went back to school, this time a trade school, made some connections, met some future co-workers, and tried very hard to get a job in games. I’d been an artist since I could hold a crayon, and games seemed to be the best place to create fun art and actually get paid on a regular basis.

My first job was as a background artist for Humongous Entertainment making kids games. I knew I’d found the right thing for me. Pushing pixels around and creating simple animations out of a strip of sprites was great fun, and I took to it like the proverbial duck. In 15 years, I’ve had nine job descriptions ranging from 2D background painter, level artist, animator, prop artist, lighting artist, FX artist, and various team leadership positions. I’ve worked for five different companies, including Beep Industries, ArenaNet, Surreal, and Monolith. I’ve shipped more than 15 titles — some great, some terrible — but I learned something from each of them.

Karma twisted a bit, and I found myself sitting on Jeff Strain’s balcony enjoying a cold beer in the summer of 2009, when he looked at me and said one word that hit me like a surprise neck punch: “Zombies”. I about crapped myself.

I had seen zombie movies before 1985, but Romero’s Day of the Dead was the exact point at which I became an unapologetic devotee. 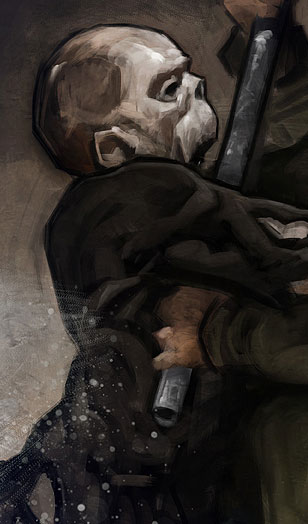 As my career in games evolved, I came to the conclusion that for me, zombies will always be the world’s most perfect game villain. Not robots, dragons, or the evil wizard (insert dark name ending with a “k” or an “r” or maybe even an “x” if he’s really bad). Blowing undead heads off with a shotgun results in not only a satisfying rain of brain matter and congealed gore (I was an FX artist, remember) but also the knowledge that you are doing them a favor. So finally, at the ripe young age of 40, my two non-wife crushes, games and zombie survival, met, had one too many Jamesons, and gave birth to this studio. I’m working with old friends at a small, scrappy company dedicated to the sole purpose of making the game I’ve wanted to play for my whole life. I get to use my experiences in the Army to help make it feel right. To this end, I’ve stepped into a design role at Undead Labs, with Nerd Horns firmly attached, to help realize this dream.

Games have come so far in my lifetime that they are now a massive part of popular culture. Games provided the lumber to build my house. Games have kept me young; maybe not in body, but in spirit. Games provide the creative outlet my artistic side has craved since I was five. My wife occasionally asks me not to spend SO much on games; she doesn’t buy my usual line that they are all for research. She’s right, of course. Now, instead of playing NHL Hockey 94 into the wee hours of the morning like I did in my 20’s, I get up early and play before work to get the idea machine running. My kids have been gamers since they could hold controllers. My daughter is an ace at any Wii or Nintendo DS game, and my son is the world’s most natural drummer in Rock Band. It’s in the family’s blood now. The wife occasionally plays Ms. Pacman but she’s content not to play more as long as her high score isn’t beaten. She tolerates the zombie smashing strategy discussions I have with my daughter, and occasionally calls me names other than Vidiot. But if the word describes the condition I’m in now, well, so be it. 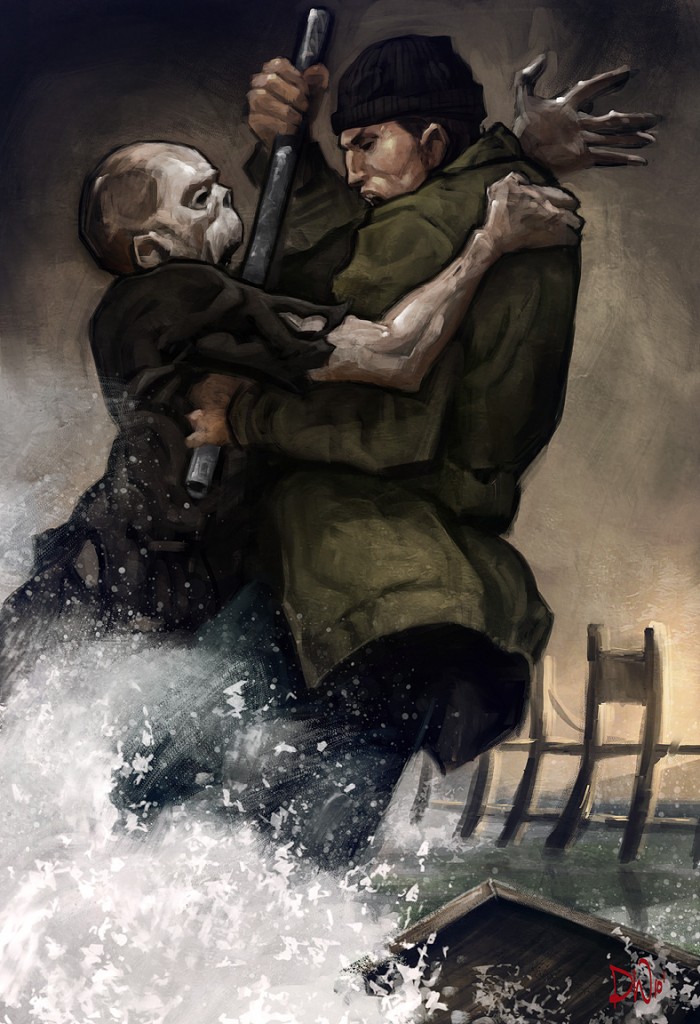 [PS: If you just can’t get enough Brant and would like to know more about him, be sure to check out Jeff’s introduction.]