I love the idea of MMOs. The idea of playing in a massive, persistent world with my best friends and folks from all over the world is incredibly appealing. Current MMOs offer the world, and tons of players, but I’m an action gamer and that’s just not what MMOs are right now.

I’ve been dreaming about what an MMO could be since I was a n00b designer. In my mind I always pictured piling into a car with my friends and tearing off into a massive world. They would lean out of the car, shooting and swinging bats.

MMOs get breaks because of their social nature, but if you really look at them closely they’re barely even games. Mario 64 (nearly 15 years old at this point) feels better than any MMO I’ve ever played. MMOs aren’t even close to keeping up with cutting edge videogames from a gameplay or presentation perspective. 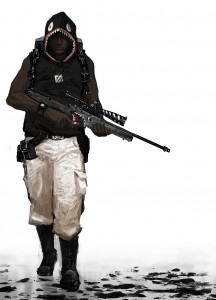 I’m a console guy. I always have been. I cut my teeth on the NES, playing Mario 3 and Contra. I got completely sucked into A Link to the Past and Super Metroid. The FEELING of interacting with the world has always been stronger for me on consoles; it’s what they’re made for.

What about MMOs? What if we replaced all the math with action? What if an MMO could feel like a kickass console game?

How about we give you a bat, and when you press a button to swing that bat, it hits things. Not just range tests to the target, but your bat has collision and the path it moves through defines what you hit. Not numbers and spreadsheets behind the scenes, but you actually hit that thing with your weapon.

How about if you could actually dodge out of the way of enemy attacks? Not a skill that gives you an increased percentage to do some counter-math against the opponent’s formula, but an actual dodge-out-of-the-way that lets you duck just underneath the rotting grasp of an attacking zombie. 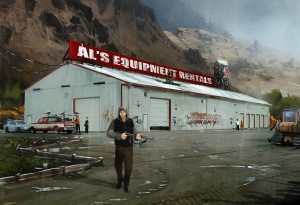 How about some actual guild goals? Not, “We’re doing this raid to get our healer caught up on gear,” but instead, “We’re going to raid the power plant because if we clear it out we can get power to our community and get our communications network online.”

Imagine plowing a modified death truck into a swarm of zombies to clear a path to a building your community wants to scavenge. Imagine vaulting over a couch smoothly into a jump kick, whipping out your pistols and nailing a couple of quick headshots, then diving out the window onto the back of an RV that your buddies are driving. Imagine loading a car up with explosives, driving full speed at a massive swarm of zombies, diving out and detonating the trap just as it plows its way to the heart of the horde.

It’s my job to sure that the game feels AMAAAAZING. Fortunately I’m in a great situation where I won’t be allowed to fail. Everybody at Undead Labs is a gamer, and by that I don’t mean they’re into games only the really hardcore players are into, I just mean that everyone here LOVES games. And they have high standards. That makes it pretty easy for me to get solid opinions about the latest gameplay tweaks I made. 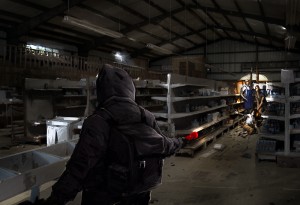 I believe that MMOs can and should compete with the best triple-A games. And I believe consoles are the perfect place for MMOs to make this stand. Together we’ve learned tons about the power of persistent worlds from today’s PC MMOs, and I’ve personally spent years working on top-tier console action games, so let’s bring them together.

Everything that I’ve worked on has been preparing me for this one game. Vehicle tuning on Road Rash 64 and Kinetica, combat on God of War, shooting in SOCOM, systems on Guild Wars. Each of those games has taught me valuable lessons about game feel and tuning, and I’m putting all of that knowledge to work here at Undead Labs.

I don’t like MMOs, but I love this game. You will too.

[PS: If you just can’t get enough Foge and would like to know more about him, be sure to check out Jeff’s introduction.]