Today it’s my pleasure to introduce our technical art director Steve Theodore, also referred to as the “king of all technical artists” by our art team.

(With apologies to all other technical artists out there; I’m sure you’re awesome too…)

It’s a distinctive pleasure to have Steve onboard at Undead Labs, because I’ve been trying to recruit the guy for at least five years. Can you believe he turned me down to take a job at Bungie working on Halo 3? Really, what was he thinking? 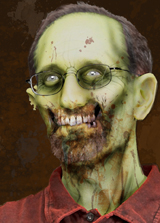 Back when 3D was synonymous with View-Master, Steve dropped out of a Ph.D. program in ancient history to start rendering 3D scenes from the command-line of the Brown University mainframe. Steve went pro in the early ’90’s, doing animations for a variety of commercial and television projects. His first game job was building mechs and environments for FASA’s MechCommander in 1995.

I’m sure the ancient history gig would have been a lot more exciting.

Since his MechCommander days Steve has worked on some of the most well known titles in the industry. He worked as an artist and animator on Half-Life, Team Fortress Classic, Team Fortress 2 and Counter-Strike. After a stint as the artist-in-residence at Rad Game Tools, he helped Zipper Interactive make the leap to next-gen as their technical art manager. In 2006, he helped to found Seattle-based studio Giant Bite. Most recently he was the technical art director at Bungie for Halo 3 and Halo:Reach. Steve also writes the Pixel Pusher art column for Game Developer Magazine and is a frequent speaker GDC and other games industry events.

Welcome aboard, Steve! I’m glad you finally came to your senses and stopped working on those little indie titles…

PS: Also be sure to check out Steve’s welcome message to his fellow survivors.