For seven years, I headed up game design at ArenaNet, working with a family of friends to create the Guild Wars games. I am tremendously proud of the work we did together and of the world that millions of players have lived in and enjoyed.

Still, when the opportunity came to join Jeff at Undead Labs, I didn’t hesitate. I knew I could do so safely. Guild Wars 2 is well in hand. Eric Flannum has been at the helm as lead designer for more than a year now, taking the concepts we developed at the start of the project and bringing them to life. He and I are long-time friends and partners-in-crime, working together on Warcraft II, Diablo, Starcraft, Sacrifice, and every Guild Wars release to date. I have complete confidence in the game that he and the team will make.

I am ready for a new challenge, and this is the perfect opportunity to do something groundbreaking and amazing. Console zombie-survival MMO. If your heart doesn’t race a little at the possibilities, check to make sure you’ve got a pulse at all. 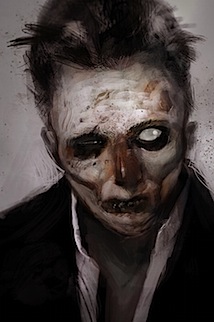 Let’s start with a game that has the kind of shotgun-blast, chainsaw-to-the-head, makeshift-flamethrower, plow-through-twenty-zombies-with-a-pickup-truck gameplay that a zombie game deserves. And let’s elevate it to something more. This isn’t the story of surviving for half an hour. It isn’t about making it from one end of a map to the other. It’s about players coming together as a community and rebuilding civilization after total societal collapse.

Where will you establish your home? How many people can you rescue? Can you find sources of food and water and ammo? Most of all, how will you hold off the zombie hordes? When you’re wading in and hacking up zombies, when you’re luring a zombie horde to a booby-trapped gas station, when you’re raiding a sporting goods store for more bullets, it’s for a reason. This isn’t a canned, theme-park MMO. It’s a world to be reconquered and rebuilt. A world that actually evolves based on player actions. A world where you care about everything that’s happening because it actually matters. A world full of zombies and those who stand against them.

We’re just getting started here at Undead Labs. We still have a long way to go to deliver on our goals, but already a vision is crystallizing for a game not bound by out-dated, boilerplate MMO conventions and instead focused on all the joy, drama, humor, horror, blood, guts and gunfire that make you love zombies.

[PS: If you just can’t get enough Phinney and want to know more about him, be sure to check out Jeff’s introduction.]