Today is a momentous day at Undead Labs. Over the past few months we’ve been quietly refining our design, working out the core systems, and — most importantly — building the most ass-kicking zombie-slaying game development team ever assembled. Over the next few weeks I’ll be introducing the entire team to you; including our inbound art director Doug Williams, who painted the tasty image attached to this post.

Today, we start with my long-time friend and colleague James Phinney. 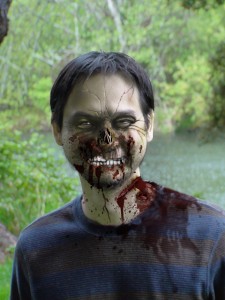 Phinney and I met in 1996 on my first day at Blizzard Entertainment as a newb game programmer. He made a huge impression on me with his answer to my question about how long he’d been at Blizzard: “Since before we were Blizzard.” I didn’t know who the hell he was, but I knew he must have been a veteran, and he’d been part of the Warcraft II development team, so he must have been a complete badass to boot. Over the next few years I had the pleasure of working closely with him on Diablo, for which he was a producer, and then on StarCraft, for which he was both the lead producer and lead designer.

It’s no surprise that Phinney was at the top of my list when we started looking for a lead designer for Guild Wars. I was fortunate to again have the opportunity to work side-by-side with him throughout the development of Guild Wars in his role as lead designer, and later as the design director for ArenaNet.

So it can’t be much of a surprise that Phinney would again be at the top of my list of designers to lead the design of our open world zombie-apocalypse game. Not only is he a veteran game designer and a staunch advocate for innovation in the online game industry; he’s also a huge zombie fan and a passionate console gamer. A true trifecta of design awesomeness.