Welcome to the year 2000 2010. As you know, our Big Plan is to bring the best elements of the first-person shooter massively multiplayer online game genre to the console platform.

I know, you’ve heard this before. I know you are not impressed, because every time you hear this it either never happens, or you get a weak port of an otherwise excellent PC title that does not feel at all like a true console game, and then the publisher expresses amazement that it was not successful and blames the console platform. It happens every time, and now “they” are saying that FPS MMO games are just simply better suited to the PC, and that console developers should just give up and go build more Tomb Raider and Madden sequels.

We hear you, console fans. But this time it’s going to be different, because we are willing to chart a bold course and develop an FPS MMO specifically for consoles, which will allow us to take advantage of the unique features of the platform and give you a true console experience. The pundits still say we’re crazy, and that it will never work. I guess we’ll be able to look back in ten years and know who was right.

So, let’s talk about some of these “unique features” of a console FPS MMO…

The problem, of course, is that they are looking at it through the lens of the games they can see today, rather than the games that might be designed differently tomorrow. Does anyone really believe you can take a game like World of Warcraft, polished though it may be, and port it to the Xbox 360 or Playstation 3 and have a great game experience? Of course not. A great console MMO will require rethinking the fundamentals, starting with the user interface and all the way through the core combat mechanics, social infrastructure, avatar control, world interaction, and sense of pacing and scale.

Here are some opportunities we see for MMOs on consoles. These aren’t necessarily things you can only do on consoles (although many of them are), but they are instead things that are expected by console gamers and naturally supported by the platform hardware. We’ll be exploring these in greater depth in future articles. Take a look,

ponder, and feel free to share your own thoughts on the best ways to leverage the console gaming experience into the world of MMOs. 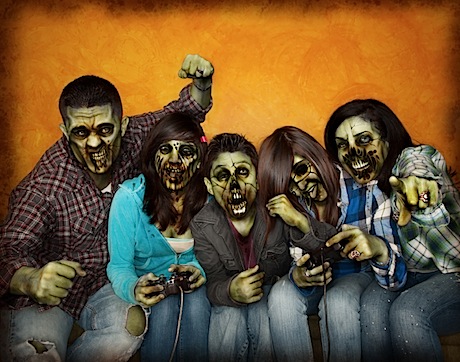 Everyone knows that MMOs are social games, right? So why do so many people associate MMOs with the stereotype of the loner 30-something guy who spends all day in his mom’s basement surrounded by old pizza boxes? (C’mon man, that’s not us. It’s our roommate’s house, and we throw the pizza boxes out every day.) In some respects MMOs can actually be antisocial, because the PC is usually in an isolated room of the house, and because you can’t easily share the experience with your roommates, friends, or family unless they bring their gaming PCs into the same room.

By contrast, game consoles are often connected to large-screen TVs in the family room, which makes it easier and more fun to invite friends and family to jump into a game and play with you. A well designed multiplayer console game, such as Lego Star Wars or Lego Indiana Jones, provides a contextual split-screen view and makes it easy for friends to join you with easy drop-in/drop-out play.

Imagine if we could bring that to the MMO world. Imagine tossing a controller to a friend so she can quickly login with her character and join you wherever you are, right on the same screen. Or perhaps she logs in with one of your characters so you can show her around the game. Either way, it adds a new dimension to the “social” aspect of MMOs.

Remember your first few hours with Super Mario Bros., and how the controller seemed to disappear from your hand? You became one with Mario; you stopped thinking about controlling him; he was simply an extension of your will. That’s some beautiful console mojo, and something we hope to achieve in our MMOZ. Leaving behind the mouse and keyboard for the console controller gives us an opportunity to make it fun to just move through the world.

Okay, we’re not going to achieve Super Mario Bros. perfection, but we can get damn close.

This is tough to pull off in an MMO, because you have to consider latency when designing your combat system. Having said that, we have to do it. This will be part design magic, and part technical magic, but rest assured that making a combat system that feels more like a console than an MMO is one of our top priorities.

You’ll be fighting for survival surrounded by the abandoned products of 21st century civilization. Will there be cars, motorcycles, and trucks? Of course. Should you be able to drive them, crash them, and splatter zombies with them? Yes, please.

Would you accept anything less? Neither would we.

You may have noticed that zombies are kind of stupid. Sure, they can rip out your beating heart and eat it in front of you if you let them get you cornered. Or if they sneak up on you at night. Or if there are just too many of them… But they still behave according to known, or at least discoverable, rules, and you should be able to have fun exploiting those rules.

Building traps from objects you find in the world (yes, including crates, but probably not pressure plates), or channeling the shambling hordes through your murder holes and across your cleverly (or even poorly) concealed pits is part of the fun. By integrating physics not only for combat and vehicles, but also for the way the zombies interact with the environment, we can give you the power to use the environment to your advantage when fending off an attack.

I’m sure you’ve seen worst-case-scenario examples of MMO user interfaces that are cluttered with countless rows of buttons, status bars, notification windows, chat messages, and icon docks. (I wish I could post an image here, but our lawyers would probably shoot me.) This is one of the main reasons that hybrid games attempting to play well on both PC and console often fail. In general, console gamers expect interfaces to be more transparent and to “get out of the way” of the game world. Moving into the console world allows us to rethink the MMO user interface and design something that is leaner, lighter, and less intrusive.

We often hear that the biggest design challenge to MMOs on console is the lack of a keyboard. It’s true that people are accustomed to chatting by text, and that there is a certain comfort in the anonymity that a text communication interface provides. However, we view the fact that real-time voice chat is both ubiquitous and expected on the console platform to be a huge opportunity to bring new community and teamwork dynamics into the MMO genre. A challenging opportunity, to be sure — do you really want the badass ex-Marine in your party to sound like a 13-year-old? — but we have some good ideas about how to solve those challenges. In any case, voice chat is the gold standard in the console world, so you can bet we’ll make good use of it.

This is by no means a comprehensive list of console-speicific features, but it’s a good start. We are excited to have the opportunity to rethink the MMO from the ground up so that it is, before any other consideration, an excellent console game.

We’d love to hear your ideas as well. Tell us what you’d love to see in a console MMO!

Any games mentioned in this article not owned by Undead Labs are trademarks of their respective owners. No endorsement, sponsorship, or affiliation between those companies and Undead Labs is intended. Please don’t sue us kthx.