It’s been another awesomely productive week here at the Lab! While the team has been steadily cruising along on development (and putting up sweet, zombie-themed holiday decorations), I’ve been getting up to speed on design and hitting fansites to get to know you guys.

As I was catching up on forum posts, I noticed that many of you have questions for us. We’re still early in development (which means we can’t talk in great detail about certain topics), but I did find a number of things that can be clarified.

Check out what we covered.

Fatbird3 from MMOZed asks: “Will the game be an open persistent world? Or will it be instance-based? Or even session-based?”

It will be an open persistent world. Why? Let’s break it down:

Building an open persistent world just makes the most sense for what we’re trying to accomplish.

Swampfetus from MMOZed asks: “Will there be vehicles? If so, will we be able to customize them?”

Definitely. After all, who DOESN’T want to be able to jump into a truck and mow down a horde of zombies?

As far as customization goes, it’s something we’ve talked about and like. There are a lot of fun possibilities. The reality, though, is that this isn’t the kind of thing we can promise. We like it, but it’s not as core the game as other things (like dismemberment!), so if push comes to shove schedule-wise, car customization might not make the cut.

AlquedaBunny from MMOZed asks: “Is the game an FPS where you aim and shoot, having a chance to hit based on the roll of a dice?”

As Foge indicated in his last post, we want to let players determine their own fate with skillful play as opposed to figuring out how to stack the right numerical bonuses. You’ll be able to aim. We recommend aiming for the head.

Kevin Ryman from MMOZed asks: “Will there be a gun skill? Meaning the first time you pick up a rifle you wouldn’t be able to shoot the broad side of a barn, but after a few hundred times you could hit a fly off a post from a mile with no scope?”

Yes and no. There will be ways to improve your skill with weapons, but having stats doesn’t mean that you should have to suck until you grind your numbers up to a certain level. That’s not fun, so we’re not going to do it.

Fundamentally, combat is based on a player’s skill, but that still leaves plenty of room for some RPG-style advancement. As examples, things like character stamina (remember: Rule #1: Cardio), reload speed, and even how much running affects your accuracy are all on the table.

But when we talk about accuracy, we mean that in the shooter sense, not the turn-based RPG sense. It’s how much spread variance there is for your shots, not random hit chance. So a barn would have to be pretty far away for you to have trouble hitting its broad side.

BrainFriis from MMOZed asks: “What level of realism are you aiming for (besides the fact that there are zombies in the game and not in this boring old real world)?”

Well, fun is always our top priority. For example, most people can’t hot-wire a car in real life (in fact, as we were discussing at lunch yesterday, modern cars aren’t even susceptible to old-school hot-wiring). For the sake of fun, though, we’ll probably let you hop into just about any car and be able to start it up.

Still, part of the appeal of this premise of our game is that it takes place in a real-world setting (aside from the zombies, of course), so we want the overall look and feel of the game to be realistic.

Dantron from MMOZed asks: “Dantron is more concerned with the nature of the beings barbed-wired to the poles. Are they zombies or humans? If they are humans, then Dantron wonders what they did to deserve such treatment? Were these humans bad and getting their just desserts? (Mmmm…desserts…) Or were these poor unfortunate humans strung up by the bad humans? If so, why?”

Dantron is right to wonder about these things. If they were zombies, it’s hardly rational to string them up like this. If they were people (even really bad people), this would be an evil way to treat them. Either way, it seems to confirm that in a crisis situation, humans may act in ways that are neither rational nor good. Too bad that more of us aren’t robots, huh?

Nukaclaw asks in a blog comment: “There’s been this single question nagging me the every time I read your posts. How will we leave the game? When will it be safe to save and quit? Will we come back to discover our base overrun with bandits or that we’ve been transformed into one of the living dead?”

In a persistent world, action continues even when you’re away from the game. Regardless, we know that we need to be realistic about the kind of play patterns people have. Sometimes you get an urgent phone call. Sometimes you take a vacation. Heck, sometimes the power goes out. In general, the game will not kill and zombify you immediately just because you needed to take a break…even when you have to step away on short notice.

Chase asks in a blog comment: “Do you guys have any more concept art? I would love to see some more!”

Doug told us this morning that he’s tired of drawing zombies. In fact, in a teary-eyed confession, he admitted that he never liked zombies or art. There will be no more concept art.

Oh, except maybe this: 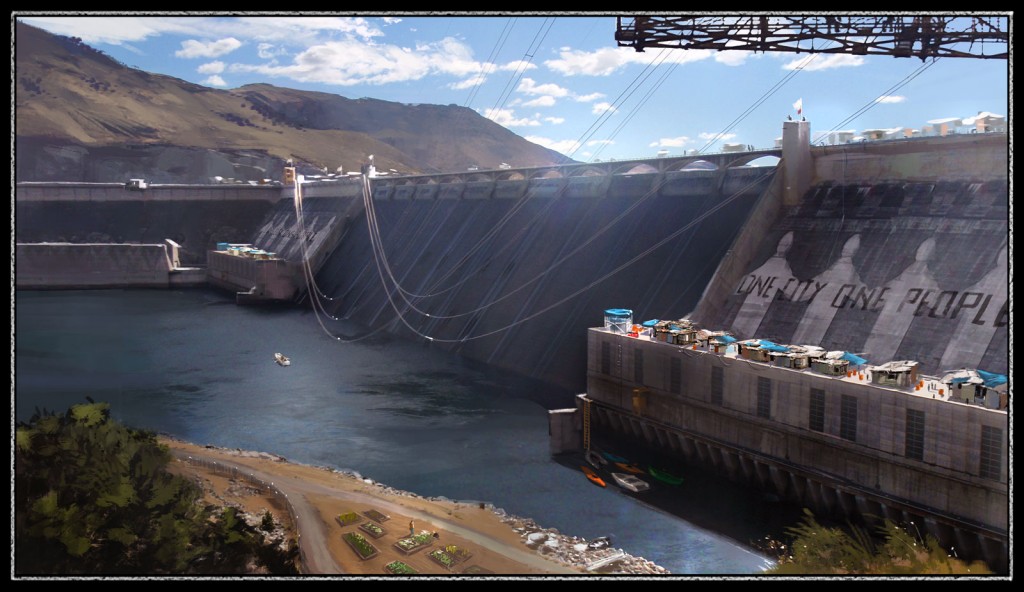 That wraps up what we’ve got for now! Stay tuned for future updates, which I’ll post periodically as more information becomes available. Also remember to follow us on Facebook and Twitter for the most up-to-date news.

Have a fantastic weekend, and don’t forget to watch the season finale of Walking Dead this Sunday. Most of us will be catching it at our favorite local pub, so here’s to it being awesome!