I’ve been waiting for this moment for almost a year.

Back in November 2009 I officially incorporated Undead Labs and announced our intention to build the world’s first (and by default, best) zombie-survival MMO for game consoles. My first thought after the website went live was that I should invite George Romero, Max Brooks, and Robert Kirkman over to my place for a weekend of zombie video gaming, movie watching, and poetry recitation. My next thought, after shaking that little fantasy, was that I wanted Doug Williams to be the art director for this game, and that nobody — and I mean nobody — else would do.

I started to obsess. I mean, check out this guy’s personal art blog for chrissake. What was I supposed to do? 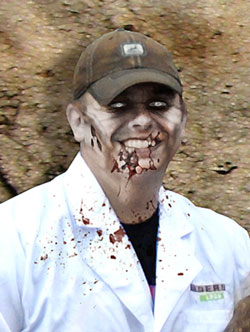 I’ve worked with Doug since 2003, when he joined ArenaNet to drive the concept art for Guild Wars. He is the most versatile, talented, and prolific artist I’ve ever met. And he’s actually a passionate gamer, which means he’s not just about making beautiful art for his portfolio; he wants to make great games. He’s also one hell of a nice guy, who has a reputation for not understanding which muscles are actually involved in causing the face to frown. But none of these reasons are the reasons this project needed Doug.

It’s because Doug needed this project.

Back in 2006 Doug and a few other guys (some of whom you’ll meet in future UL team introductions) took me to lunch and talked about this awesome idea they had for a zombie-survival MMO. I thought it sounded fantastic, and I promised them that if they ever decided to strike out and make it I would do everything I could to help get them rolling.

Well Doug, I kept my promise, and I’m beyond excited to have you here. Let’s do this.

PS: Doug loves Neill Blomkamp. If Neill comes calling, Doug might follow. Please join me in a smear campaign of Blomkamp to prevent this from happening. Everyone knows District 9 was a total ripoff of Indiana Jones and the Temple of Doom anyway…

PPS: Don’t forget to check out Doug’s welcome message to his fellow survivors.